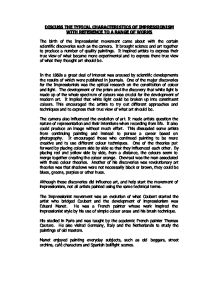 Discuss the typical characteristics of impressionism with reference to a range of works.

DISCUSS THE TYPICAL CHARACTERISTICS OF IMPRESSIONISM WITH REFERENCE TO A RANGE OF WORKS The birth of the Impressionist movement came about with the certain scientific discoveries such as the camera. It brought science and art together to produce a number of quality paintings. It inspired artists to express their true view of what became more experimental and to express there true view of what they thought art should be. In the 1860s a great deal of interest was aroused by scientific developments the results of which were published in journals. One of the major discoveries for the Impressionists was the optical research on the constitution of colour and light. The development of the prism and the discovery that white light is made up of the whole spectrum of colours was crucial for the development of modern art. It implied that white light could be broken up into constituent colours. This encouraged the artists to try out different approaches and techniques and to express their true view of what art should be. ...read more.

The painting portrayed a woodland picnic, and a female nude accompanied by two fully dressed young men staring at the observer in an indifferent manner. Not only did the subject matter offend the academics, but his style of painting was also considered shocking. He used and distorted the traditional academic technique of painting. His flat style and lack of modelling of shapes was seen as scandalous and an insult to the academics. Despite the critical opinions of those old school academics Manet continued painting in this "impressionist style" producing a number of famous paintings. In 1865 he exhibited his Olympia, this painting aroused a much more violent reaction in the academic circles because of its unorthodox realism. It was considered vulgar, immoral and an insult to good taste. It was based on a Venus by titian, which Manet distorted to depict an image of a young girl receiving flowers and waiting for her next client. Her direct gaze implies that the observer might be her next client. ...read more.

He never lacked buyers for his work and by the 1890's his sales were strong. Monet met a great number of artists throughout his life but one that became especially famous using his techniques was Alfred Sisley. Although none of his student works survived his later work was truly fascinating. One of these paintings is Village on the Banks of the Seine. It was painted in 1872. This shows a tranquil and unelaborated scene. It is a scene of simplicity, which is a characteristic used in his earlier works. He concentrated on the use of subtle colour, light and atmosphere. The trees in the foreground are painted using a certain amount of conventionality. This shows contrast in the background and foreground as the background is painted in a more impressionistic style. Impressionism brought about new freedom of colours; brighter and bolder colours. It introduced colour theories and cameras into the late nineteenth century artistic world. This opened doors for future artists allowing them to express and experiment through colours and discover that painting should not be a direct image of reality. ...read more.