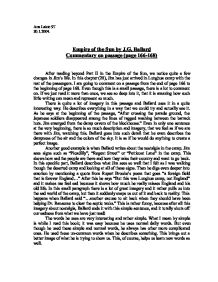 Ana Lakic 9T 30.1.2004. Empire of the Sun by J.G. Ballard Commentary on passage (page 166-168) After reading beyond Part II in the Empire of the Sun, we notice quite a few changes in Jim's life. In this chapter (20), Jim has just arrived in Lunghua camp with the rest of the passengers. I am going to comment on a passage from the end of page 166 to the beginning of page 168. Even though this is a small passage, there is a lot to comment on. If we just read it more than once, we see so deep into it, that it is amazing how such little writing can mean and represent so much. There is quite a lot of imagery in this passage and Ballard uses it in a quite interesting way. He describes everything in a way that we could try and actually see it. As he says at the beginning of the passage, "After crossing the parade ground, the Japanese soldiers disappeared among the lines of ragged washing between the barrack huts. Jim emerged from the damp cavern of the blockhouse." Even in only one sentence at the very beginning, there is so much description and imagery, that we feel as if we are there with Jim, watching this. ...read more.

He used these un-common words when he describes something. This brings out a better image of what he is trying to show us. This, of course, helps us learn new words as well. Since this is a rather short passage, we do not see a lot of themes. The main theme would probably be his survival. The passage shows how he is one of these people in the camp that are alone and barely surviving. Even though it does not clearly or obviously say in the passage that he is on the line of survival, we can see it in the "background". What I mean by this is that while Ballard is explaining to us about the nostalgia and describing the situation around Jim, he is kind of "hinting" how bad living in this camp actually is. Because his great imagery we can see how hard it is for the people there to survive. He mentions the turtle that Kimura gave to Jim. In only a few sentences we see how much Jim is attached to this turtle. This also shows us how Jim is a lonely child without any friends and the turtle is the only thing that keeps him company all the time. ...read more.

Another short but interesting point I would like to make is the way Ballard describes Jim and what is going on around him. I really like the line "He ran along the cinder path, his tattered shirt flying from his bony shoulders like the tags of washing between the huts." I think it is a very nice sentence, looking at the description of Jim. This may sound strange, but for me, it creates an image of a quite interesting painting. A painting that shows the horror of the war but a rather calm effect coming from the people-or Jim at least! On this painting I see Jim running with the wind carrying his shirt and his bones showing all over. The camp, the wires, and the horror would all be in the background, behind Jim. This would also show that despite all the sorrow and horrifying events that are happening, Jim is still a child that just wants to play with his planes and enjoy life to the fullest. The running shows this. While I read through the passage, I did not realize how interesting it actually is and how much it represents. Now I can see how important it is to read carefully and imagine. But when you read from such a good writer like Ballard, you don't even need to try! ...read more.