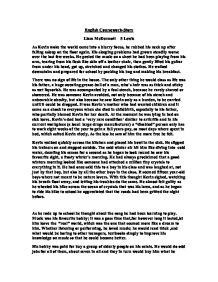 English Coursework-Story Liam McDermott 5 Lewis As Kevin woke the world came into a blurry focus, he rubbed his neck up after falling asleep on the floor again. His sleeping problems had grown steadily worse over the last few weeks. He peeled the music on a sheet he had been playing from his arm, tearing from his flesh like skin off a leather chair, then gently lifted his guitar from under his head, got up, stretched and changed his clothes. He walked downstairs and prepared for school by packing his bag and making his breakfast. There was no sign of life in the house. The only other thing he would class as life was his father, a huge sweating grease-ball of a man, who's hair was as thick and sticky as wet liquorish. He was accompanied by a foul stench, because he rarely shaved or showered. He was someone Kevin avoided, not only because of his stench and unbearable obesity, but also because he saw Kevin only as a burden, to be carried until it could be dropped. It was Kevin's mother who had wanted children and it came as a shock to everyone when she died in childbirth, especially to his father, who partially blamed Kevin for her death. ...read more.

After the register he and his classmates began to file to there next lessons one of the boys called Jake pulled Kevin's tie as he walked past, making a ridiculously small knot at the top and shouted "pea nut",while the other boy's laughed. He knew Jake was just trying to get at him, and it was only a trait of Jake, not a specific attack on him,Jake was the class clown. When he honestly thought about it, he didn't mind doing up ties. In his opinion the gentle feel of the material on his skin easily countered the inconvenience,another little thing that Kevin enjoyed in life because to him it was the littel things that counted. As Kevin walked to art he thought of his homework that he had done and was proud of it and could'nt wait to show it to his teacher. Having taken the subject at G.C.S.E level meant there was more interpretation and personal emotion in the work and less old boots. He was looking forward to sharing his work with the class. Upon entering he looked at the walls "again", the teacher, Mrs Parser, had put up her works in the classroom, various animal shapes cut out of wood covered in beads, glitter and what seemed to be anything she could find that sparkled. ...read more.

"She was wrong" he replied politely. Even now he was beginning to get angry. The headmistress was taken back by this and decided to put him in his place. "Kevin, Mrs Parser has studied art to a much higher level than you. She has been teaching for almost a decade, and I think has much more right to claim to know what is and isn't art than you. I demand you apologise right now, or I will be having words with your parents" Kevin felt a pain in the pit of his stomach he realised the repercussions of his farther finding out, his older friends being told (falsely) that he is a delinquent, and more importantly the possibility of a musical ban. His mind raced for an practical solution, until finally he thought of one. "Mrs Parser I am sorry for hurting your feelings and I regret doing so." Kevin said genuinely "And I hope we can get on in the future" "See Kevin don't you feel better?" Smiled Mrs Parser "Yeah" But the reason was not because he had apologised, but because he was out of trouble and he knew it. As he rode home he remembered the song he was learning. The morning seemed so long ago but he was home, back to his guitar and his music and he felt like he had just woken up. ...read more.