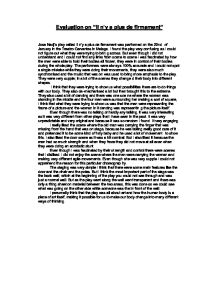 Evaluation on "Il n'y a plus de firmament" Jose Nadj's play called Il n'y a plus de firmament was performed on the 22nd of January in the Treatro Cervantes in Malaga. I found the play very confusing as I could not figure out what they were trying to bring across. But even though I did not understand and I could not find any links from scene to scene I was fascinated by how the men were able to hold their bodies all frozen, they were in control of their bodies during the whole play. The performers were always 100% accurate and I could not spot a single mistake while they were doing their movements, they were also much synchronised and the music that was on was used to bring more emphasis to the play. ...read more.

trying to show us was that the men were representing the frame of a picture and the woman in it dancing was representing the picture itself. Even though there was no talking or hardly any talking, it was very interesting as it was very different from other plays that I have seen in the past. It was very unpredictable and very original and because it was so random I found it very engaging. I really liked the scene where the old man was carrying the finger that was missing from the hand that was on stage, because he was taking really good care of it and pretended it to be some kind of holy baby and he used a lot of movement to show this. ...read more.

Even though she was very supple I could not apprehend the reason for this particular choreography. The staging was very simple I think that there were some main features like the door and the chair and the poles. But I think the most important part of the stage was the back wall, which at the beginning of the play you could not see through and was just a normal wall. But as the play went along the wall went transparent and there was only a thing sheet on material between the two areas, this was done so we could see what was going on the other side while someone was the in front of the wall. I personally think that the play was all about art and how the human body is a piece of art itself, making it possible for us to make our body change into many different ways of thinking. ...read more.