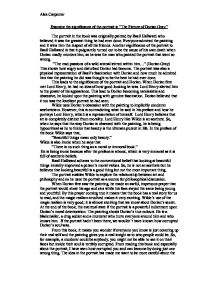 Examine the significance of the portrait in

Examine the significance of the portrait in "The Picture of Dorian Gray." The portrait in the book was originally painted by Basil Hallward who believed it was the greatest thing he had ever done. Everyone admired the painting and it wins him the respect of all his friends. Another significance of the portrait to Basil Hallward is that it poignantly turned out to be the cause of his own death when Dorian madly murders him, as he was the man who painted the portrait that went so wrong. "The mad passions of a wild animal stirred within him..." (Dorian Gray) This shows how angry and disturbed Dorian had become. The portrait was also a physical representation of Basil's fascination with Dorian and how much he admired him that the painting he did was thought to be the best he had ever done. ...read more.

Wilde is also ironic when he says that "There is no such thing as a moral or immoral book." He is being ironic because after the preface is a book, which is very immoral as it is full of aesthetic beliefs. Basil Hallward adheres to the conventional belief that looking at beautiful things innately improved a person's moral values. So, he is not an aesthete but he believes that looking beautiful is a good thing but not the most important thing. The portrait enables Wilde to explore the relationship between art and philosophy and so he uses the portrait as a source for philosophical discussion. When Dorian first saw the painting, he made an awful, impetuous prayer that the portrait would show his age and sins while his face stayed the same being young and youthful. By this prayer coming true it means that the book has a real story for us to read, and the magic realism involved makes it very exciting. ...read more.

The idea in the portrait has made me want to be more careful about the things I am doing. It shows that the soul is utterly unforgiving. For example, immediately after Dorian killed Basil Hallward there was a red stain on the portrait's hands. The portrait in the book shows Dorian's absolute corruption. In the last paragraph of the book when Dorian kills himself, the painting is restored to what it first looked like and Dorian changes into looking like what the painting did. He is described as "Withered, wrinkled, and loathsome of visage." This is how you would expect a real bad man to look like and so the portrait has a real significance in this book especially to Dorian Gray as his true soul is just covered up by his face and it really makes you think about what is underneath everyone's face and if their faces are only a veneer covering up something horrible. Alex Carpenter ...read more.