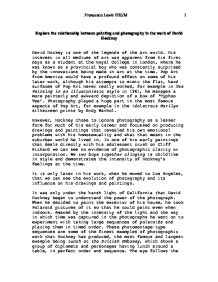 Explore the relationship between painting and photography in the work of David Hockney David Hockey is one of the legends of the art world. His interest in all mediums of art

Explore the relationship between painting and photography in the work of David Hockney David Hockey is one of the legends of the art world. His interest in all mediums of art was apparent from his first days as a student at the Royal College in London, where he was known as a provincial boy who was constantly surprised by the innovations being made in art at the time. Pop Art from America would have a profound effect on some of his later work, although his attempts to mimic the flat, hard surfaces of Pop Art never really worked, for example in Tea Painting in an illusionistic style in 1961, he manages a more painterly and awkward depiction of a box of 'Typhoo Tea'. Photography played a huge part in the most famous aspects of Pop Art, for example in the idolatrous Marilyn silkscreen prints by Andy Warhol. However, Hockney chose to ignore photography as a lesser form for much of his early career and focussed on producing drawings and paintings that revealed his own emotional problems with his homosexuality and what that meant in the suburban world he lived in. ...read more.

In his program for the "South Bank Show" Hockney explains that whilst photographs and paintings are different, they complement and extend each other and that it is possible to make paintings and drawings from photographs, or transpose images in photographs into paintings. He also commented on the relationship between drawing and photography: "they (photographs) are closely related to drawing. You have to make many decisions for image. You have many choices: you can photograph the texture, the colour, the line, you can put it in focus and out of focus. These are the kind of choices you make in drawing" (1984) The relationship between photography and painting is further developed in Hockney's hyper-realistic paintings for example Mr and Mrs Clarke and Percy in 1970-71. This is one of Hockney's most famous pictures, not so much for the absolute stillness and photo-like realism of it, but the emotional acumen that Hockney felt when painting it. Within one year of the finished painting, Mr and Mrs Clarke were divorced. As one art critic put it: ' Mr and Mrs Clark have not long been married but already the relationship between the straight bride and gay groom was in trouble. ...read more.

This is very important in the analysis of the relationship between photography and painting in Hockney's work, as it shows how closely he worked with the two mediums. It can be seen again when Hockney uses images of soft pornography from homosexual magazines and paints men in poses similar to the men in these photographs, for example in Shower 1967. The relationship between photographs and paintings is further developed in some of Hockney's later work, such as Furstenberg, Paris in 1985. In this painting, the image itself is fragmented into square, photograph-like segments. It is a painting that tries to become a photomontage, using the clarity and hyper-real precision that defines so much of Hockney's work and creating a landscape that looks like one of his 'joiner' photomontages. This is not the only example of this type of later work: Pearblossom Highway 18th April 1986 also fragments the landscape into photograph-sized segments, whilst using road signs to create a weird perspective almost like foreshortening to skew the viewer's perception of the road. This is one of Hockney's most beautiful alluring paintings and shows exactly how the relationship between photography and painting has developed and become central to Hockney's work. ?? ?? ?? ?? I Francesca Lewis VIIIJM ...read more.