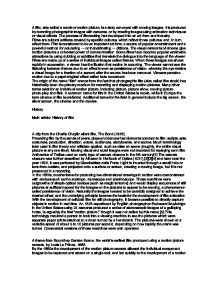 A film, also called a movie or motion picture, is a story conveyed with moving images. It is produced by recording photographic images with cameras, or by creating images using animation techniques or visual effects. The process of filmmaking has developed into an art form and industry. Films are cultural artifacts created by specific cultures, which reflect those cultures, and, in turn, affect them. Film is considered to be an important art form, a source of popular entertainment and a powerful method for educating - or indoctrinating - citizens. The visual elements of cinema give motion pictures a universal power of communication. Some films have become popular worldwide attractions by using dubbing or subtitles that translate the dialogue into the language of the viewer. Films are made up of a series of individual images called frames. When these images are shown rapidly in succession, a viewer has the illusion that motion is occurring. The viewer cannot see the flickering between frames due to an effect known as persistence of vision, whereby the eye retains a visual image for a fraction of a second after the source has been removed. Viewers perceive motion due to a psychological effect called beta movement. The origin of the name "film" comes from the fact that photographic film (also called film stock) has historically been the primary medium for recording and displaying motion pictures. ...read more.

The public was relatively indifferent to color photography as opposed to black-and-white,[citation needed] but as color processes improved and became as affordable as black-and-white film, more and more movies were filmed in color after the end of World War II, as the industry in America came to view color as essential to attracting audiences in its competition with television, which remained a black-and-white medium until the mid-1960s. By the end of the 1960s, color had become the norm for film makers. Since the decline of the studio system in the 1960s, the succeeding decades saw changes in the production and style of film. Various New Wave movements (including the French New Wave, Indian New Wave, Japanese New Wave and New Hollywood) and the rise of film school educated independent filmmakers were all part of the changes the medium experienced in the latter half of the 20th century. Digital technology has been the driving force in change throughout the 1990s and into the 2000s. Theory Main articles: Film theory and Philosophy of language film analysis Film theory seeks to develop concise and systematic concepts that apply to the study of film as art. It was started by Ricciotto Canudo's The Birth of the Sixth Art. Formalist film theory, led by Rudolf Arnheim, B�la Bal�zs, and Siegfried Kracauer, emphasized how film differed from reality, and thus could be considered a valid fine art. ...read more.

Already by 1917, Charlie Chaplin had a contract that called for an annual salary of one million dollars. From 1931 to 1956, film was also the only image storage and playback system for television programming until the introduction of videotape recorders. In the United States today, much of the film industry is centered around Hollywood. Other regional centers exist in many parts of the world, such as Mumbai-centered Bollywood, the Indian film industry's Hindi cinema which produces the largest number of films in the world.[6]. There is also another film industry name Lollywood based in Lahore. Whether the ten thousand-plus feature length films a year produced by the Valley pornographic film industry should qualify for this title is the source of some debate.[citation needed] Though the expense involved in making movies has led cinema production to concentrate under the auspices of movie studios, recent advances in affordable film making equipment have allowed independent film productions to flourish. Profit is a key force in the industry, due to the costly and risky nature of filmmaking; many films have large cost overruns, a notorious example being Kevin Costner's Waterworld. Yet many filmmakers strive to create works of lasting social significance. The Academy Awards (also known as "the Oscars") are the most prominent film awards in the United States, providing recognition each year to films, ostensibly based on their artistic merits. There is also a large industry for educational and instructional films made in lieu of or in addition to lectures and texts. ...read more.