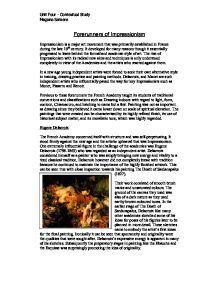 Forerunners of Impressionism Impressionism is a major art movement that was primarily established in France during the late 19th century. It developed for many reasons though it essentially progressed to leave behind the formal and academic style of art. The rise of Impressionism with its radical new aims and techniques is only understood completely in view of the Academies and the artists who reacted against them. In a new age young independent artists were forced to seek their own alternative style in training, drawing practice and painting methods. Delacroix, and Manet are such independent artists who influentially paved the way for key Impressionists such as Monet, Pissarro and Renoir. Previous to these forerunners the French Academy taught its students of traditional conventions and classifications such as Drawing indoors with regard to light, form, contour, Chiaroscuro, and hatching to name but a few. Painting was not as important as drawing since they believed it came lower down on scale of spiritual elevation. The paintings that were created can be characterised by its highly refined finish, its use of historical subject matter, and its moralistic tone, which was highly regarded. Eugene Delacroix The French Academy concerned itself with structure and was self-perpetuating. It stood firmly against the new age and the artistic upheaval that was Impressionism. One extremely influential figure in the challenge of the academies was Eugene Delacroix (1798-1863) who was regarded as an independent artist. Delacroix considered himself as a painter who was simply bringing new energy and vitality to a tired classical tradition. ...read more.

It was Manet's treatment of the tache that influenced Impressionist painters and later on Post-Impressionists such as C�zanne. The tache, though it is a colour sensation has some weight, thickness and texture which all effect the viewer's conception of colour. The play of light across the surfaces of some Impressionist paintings can be used as a deliberate suggestion of natural light effects depicted. Spontaneity? Despite the fact that one fundamental Impressionist technique is to observe and record, almost all of the painting's were not completed ' en plein air'. Impressionists were concerned with retaining the quality of the first immediate impression, even in works, which were not spontaneously painted at a single sitting. Their concern was thus as much with rendering the appearance of spontaneity, with finding a visual language, which embodied that idea of spontaneous painting. Impressionists created the illusion of immediacy, which did not keep with the infamous Impressionist practice of completing paintings at a single sitting. It was not that the painters could not complete a painting au premier coup but that time played against them when painting outdoors. The light and atmosphere is ever changing creating a challenge for the Impressionist. Monet was to have said one effect -' lasted only seven minutes, or until the sunlight left a certain leaf, when he took out the next canvas and worked on that.' Claude Oscar Monet (1840-1926) Monet is one of the most famous Impressionist artists and is world renowned for his artwork. ...read more.

The brush marks are unique, each one adopting it's own shape. Matisse often avoided detail, instead using bright vivid colours and strong lines to create a sense of movement. Matisse thought that colour was as important as a painting's subject. His choices of colours are not natural; consequently it further expresses his freedom of choice. The view is teeming with light creating vibrancy. Through the window one can see small boats on pink waves under a turquoise sky with more pink. The surrounding walls and glass doors are painted in blue-green's, purple and orange-red. Cubism One of the most influential and groundbreaking art movements of the twentieth century was Cubism pioneered by Pablo Picasso (1882-1973) and Georges Braque (1882-1963). Picasso and Braque initiated the movement when they took counsel in Post-Impressionist Paul C�zanne's advice. Artists should treat nature - " in terms of the cylinder, the sphere and the cone."-1904. The Cubist style emphasized the flat, two-dimensional surface of the picture plane in turn rejecting the traditional techniques of perspective, modelling, chiaroscuro and contesting long-established theories of art as the imitation of nature. Cubism derived its name from comments that were made by Matisse and critic Louis Vauxcelles, who described Braque's 1908 work House at L'Ebstaque as composed of cubes. Both Picasso and Braque were greatly inspired by African art in particular sculptures, by Post-Impressionist painter Paul C�zanne and the Fauves. Cubist painters were free to present a new reality in paintings that depicted radically fragmented objects, whose several sides were seen simultaneously. ?? ?? ?? ?? Unit Four - Contextual Study Msgana Semere ...read more.