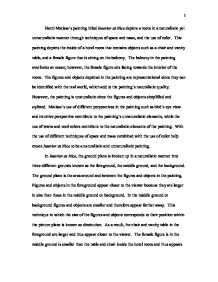 An example of bird's eye view from the painting would be the chair in front of the vanity table. It creates the illusion that the viewer is right above the chair looking down at it. The floor is also painted in bird's eye view and creates the illusion that the floor is tilting up rather than being flat. However, no other objects in the painting are painted in this perspective creating it to be unnaturalistic. Another unaturalistic perspective depicted in Interior at Nice is intuitive perspective, which is an illusion of special depth. It is a technique of presenting an illusion of the three-dimensional world on a two-dimensional surface that does not follow the rules of linear perspective. Intuitive perspective consists of a horizon line and many vanishing points, unlike linear perspective which only consists of two vanishing points. In Interior at Nice, the horizon line is where the ocean and the sky meet in the background. The vanishing points are found by orthogonal lines which are perpendicular to the picture plane, as opposed to linear perspective which uses parallel lines. ...read more.