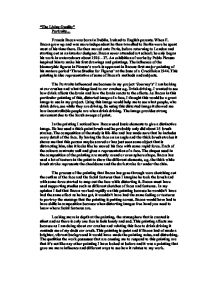 "The Living Quality" Portraits... Francis Bacon was born in Dublin, Ireland to English parents. When F. Bacon grow up and was more independent he then travelled to Berlin were he spent most of his time there. He then moved onto Paris, before returning to London and starting out as an interior designer. Bacon never attended art school; he only began his work in watercolours about 1926 - 27. An exhibition of works by Pablo Picasso inspired him to make his first drawings and paintings. The influence of the biomorphic figures in Picasso's work is apparent in Bacons first major painting of his mature period 'Three Studies for Figures' at the base of a Crucifixion 1944. This painting is also representative of some of Bacon's methods and subjects. ...read more.

In the painting I noticed how Bacon used basic elements to give a distinctive image. He has used a thick paint brush and he probably only did about 15 brush strokes. The composition of the study is life-like and has made sure that he includes every detail of the face. By having the face on an angle and the thick brush strokes it shows me that this person maybe scared or has just seen some object that is distracting him, also it looks like he moved his face with some rapid force. Each of the colours contrasts well and gives a representation of a face. The shapes used in the composition of the painting are mostly round or even sphere shape. ...read more.

Bacon would have had to have skills in composition because when distorting images free hand you need to know where facial features are. Looking more in depth at the painting, the atmosphere that is created is silent and as there is only one face is feels lonely and sad. This painting affects me because as I am doing about car crashes and relating this face to drink driving it reminds me of my dads car crash. This painting is quiet and if Bacon had of made a brighter, vibrant background it would have made the painting noise, and disturbing. The qualities the work possesses that are causing me to respond to this painting are that it's not like any other painting I have looked at before and it was a painting that gave me more influence and different ways to see how it relates to my work. ...read more.