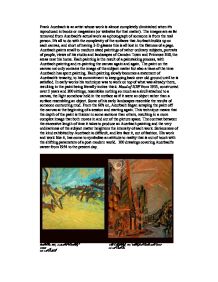 Frank Auerbach is an artist whose work is almost completely diminished when it's reproduced in books or magazines (or websites for that matter). The images are as far removed from Auerbach's actual work as a photograph of someone is from the real person. It's all to do with the complexity of the surfaces that Aurbach builds up on each canvas, and short of having 3-D glasses this is all lost in the flatness of a page. ...read more.

Each painting slowly becomes a statement of Auerbach's tenacity, to his commitment to keep going back over old ground until he is satisfied. In early works his technique was to work on top of what was already there, resulting in the paint being literally inches thick. Head of IOW from 1955, constructed over 2 years and 300 sittings, resembles nothing so much as a skull attached to a canvas, the light somehow held in the surface as if it were an object rather than a surface resembling an object. ...read more.

The contrast between the excessive length of time it takes to produce an Auerbach painting and the very ordinariness of the subject matter heightens the intensity of each work. Seriousness of the kind exhibited by Auerbach is difficult, and lets face it, out of fashion. His work and work like it, has come to symbolise an attitude to reality that is out of touch with the shifting parameters of a post-modern world. 100 drawings covering Auerbach's career from 1954 to the present day. Primrose Hill, Autumn Morning The Chimney, Mornington Crescent 1987 1968 oil on canvas Oil on board ...read more.