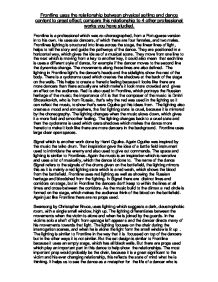 Frontline uses the relationship between physical setting and dance content to great effect; compare this relationship to 4 other professional works you have studied

Frontline uses the relationship between physical setting and dance content to great effect; compare this relationship to 4 other professional works you have studied. Frontline is a professional which was re-choreographed, from a Portuguese version in to his own. He uses six dancers, of which there are four females, and two males. Frontlines lighting is structured into lines across the stage, the linear lines of light, helps to tell the story and guide the pathways of the dance. They are positioned in a horizontal way, which gives the ideas of a musical score. They move from one line to the next which is moving from a key to another key, it could also mean that each line is uses a different style of dance, for example if the dancer moves to the second line the dynamics change. The movements along those lines are also defined. The lighting in Frontline light's the dancer's heads and the sidelights show the rest of the body. There is a cyclorama used which creates the shadows at the back of the stage on the walls. ...read more.

The space and lighting is similar to Frontlines. Again the music is an inspiration which is narrative and uses a lot of musicality, which the dance id done to. The name of the dance Signal refers to the signals of the drums given on the battlefield, the lighting mirrors this as it is mainly a red lighting state which is a red wash, which shows the blood from the battlefield. Frontline uses red lighting as well as showing the Russian heritage and bloodshed from the fighting. In Signal there are distinct lines and corridors on stage, but in Frontline the dancers don't keep to within the lines at all times and cross between the corridors. As the music build to the climax a red circle is formed on the stage, which makes the audience think of the blood on the battlefield. Again just like Frontline there are no props used. Swansong by Christopher Bruce, uses lighting which suggests a dark, claustrophobic room, with a single small window, high up. The lighting differentiates between the movements when the victim is alone and when he is joined by the guards. ...read more.

Like in Frontline there is a lot of floor work, which all takes place in a semi-lit studio or in the background of the cathedral and the standing dancers are lit in a soft angelic glow. The set design is mainly sight specific, not like Frontline, but the lighting is similar when on stage, a grey is used like in Frontline and a steel blue, which gives it a mechanical feel or could be represented as water washing there sins away. Swan Lake is by Matthew Bourne, this dance is completely different to Frontline, and it has no similarities. The difference is that Swan Lake is that it has a large elaborate stage which the audience might focus on more than the actual dancers. But big seta also help tell the story, in this case if there was not elaborate setting, such as the bed, backdrops and costumes, the story would not be told and we would not know what the dance is about. This dance gives a definite storyline, which helps us to have visual clues what is going on in the story as there is obviously no dialogue. ?? ?? ?? ?? ...read more.