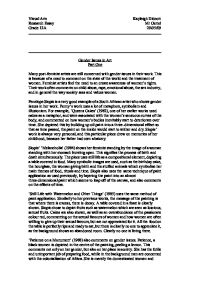 Visual Arts Kayleigh Didcott Research Essay Mr Oertel Grade 12A 20/05/09 Gender Issues in Art Part One Many post-feminist artists are still concerned with gender issues in their work. This is because of a need to comment on the state of the world and the treatment of women. Feminist artists feel the need to an create awareness of women's rights. Their work often comments on child abuse, rape, emotional abuse, the sex industry, and in general the way society sees and values women. Penelope Siopis is a very good example of a South African artist who shows gender issues in her work. Penny's work uses a lot of metaphors, symbolism and illusionism. For example, 'Queens Cakes' (1982), one of her earlier works used cakes as a metaphor, and were associated with the women's sensuous curves of the body, and commented on how women's bodies inevitably start to deteriorate over time. She depicted this by building up oil paint into a three-dimensional effect so that as time passed, the paint on the inside would start to wither and dry. Siopis' work is always very personal, and this particular piece drew on memories of her childhood, because her father had own a bakery. Siopis' 'Melancholia' (1984) shows her feminist standing by the image of a woman standing with her stomach bursting open. This signifies the process of birth and death simultaneously. ...read more.

Similarly to 'Dora', Saartjie is also standing on a box in the caricatures of her. She is being example by white Eurpoean men as if she were a sciencific experiment. This comments on the sexual oppression of women, and on racial oppression. Penny Siopis is very interested in the process of aging, and this is clearly seen in her work. As a woman, she understands the fears of womanhood, as well as the sexual ways in which women are so often abused. Part Two Tracey Emin is notorious for speaking out about issues that are not socially acceptable as topics of conversation. Nothing is sacred for her. Tracey Emin is a woman with issues. This is clearly evident in her work, which is brash ad crude in it's exploration around gender issues and sexual experimentation. Emin is skilled in many different mediums. This may be because she studied Fashion Design at Medway College of Design between 1980 and 1982, followed by printing at Maidstone Art College in 1984. She then majored in painting at the Royal College of Art in London in 1987. Her different and very diverse mediums include: installation, monoprints, neon signs, photography and fabric and embroidery. Her most famous example of installation work is her famous 'tent', 'Everyone I Have Ever Slept With'(1995). It is a blue tent inside which she has embroidered, in bright colours, the names of all the people she has slept with in her lifetime. ...read more.

Her most famous work in this medium is the previously mentioned 'There's A Lot Of Money In Chairs', onto which she embroidered the date of her and her grandmother's birth, as well as family names and the pet names that she and her grandmother had for each other 'Puddin' and 'Plum'. She chose to give her piece the given name because it was a saying of her granmother's, with whom she shared a close familial bond. 'Hate And Power Can Be A Terrible Thing' (2004) was a large quilt that commented on Magaret Thatcher in attack on young men in the Argentinian navy, as well as women who steal other women's husbands and boyfriends, for whom Emin says she holds "no respect... women who betray and detroy the hearts of other women". Tracey Emin's work, although not the least bit subtle, certainly puts across a very strong message of how she feels about important issues in her life. Her art is her way of expressing how she feels about her identity as a women. It gives one the impression that by creating these pieces she is dealing with her intense emotions. As an artist who portrays gender issues in her work, she is almost revolutionary in her experimentation with different mediums, and her lack of concern for the opinions of the general public and what they may think of her crude artistic expressions. It is for this reason, perhaps, that so many people appreciate her work. ...read more.