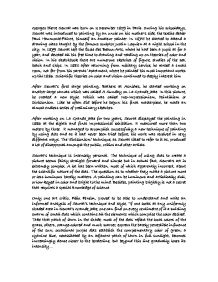 Georges Pierre Seurat was born on 2 December 1859 in Paris. During his schooldays, Seurat was introduced to painting by an uncle on his mother's side, the textile dealer Paul Haumont�-Faivre, himself an amateur painter. In 1875 he started to attend a drawing class taught by the famous sculptor Justin Lequien at a night school in the city. In 1879 Seurat left the �cole des Beaux-Arts, where he had been a pupil at for a year, and devoted all his free time to drawing and reading up on theories of color and vision. In his sketchbook there are numerous sketches of figure, studies of the sea, beach and ships. In 1880 after returning from military service, he rented a small room, not far from his parents' apartment, where he painted his most important works up till 1886. ...read more.

It measured more than two meters by three. It managed to accomplish successfully a new technique of painting by using dots and as it had never been tried before; his work was received in very different ways. The 'divisionism' technique, as Seurat liked to refer to it as, produced a lot of disapproval amongst the public, critics and other artists. Seurat's technique is intensely personal. The technique of using dots to create a picture seems fairly straight forward and simple but in actual fact, Seurat's art is extremely complex. A lot has been written, most of which apparently incorrect, about the scientific nature of the dots. The question as to whether they make a picture more or less luminous hardly matters. ...read more.

Take that patch of lawn in the shade; most of the dots reflect the local colors of the grass, others, orange-colored and much scarcer, express the barely perceptible influence of the sun; occasional purple dots establish the complementary color of green; a cyanine blue, necessitated by an adjacent patch of lawn in full sunlight, becomes increasingly dense closer to the borderline, but beyond this line gradually loses its intensity... And now that translated into English means that great thought and care had been put into where each dot would go and what shade it would be. His varying light and dark tones give figures, buildings, rivers etc definition and therefore boundaries. Seurat was an established and complete artist by the young age of 25 after painting le grande jatte but unexpectedly died of an infectious angina in 1891 at the age of 31 with his son of 1 dying shortly afterwards from the same infection. ...read more.