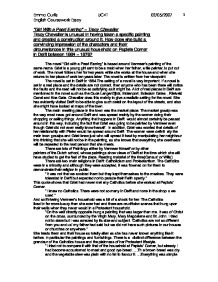 "Girl With a Pearl Earring" - Tracy Chevalier Tracy Chevalier is unusual in having taken a specific painting and created a construction around it. How does she build a convincing impression of the characters and their circumstances in this unusual household on Papists Corner in Delft between 1664 - 1676? The novel "Girl with a Pearl Earring" is based around Vermeer's painting of the same name. Griet is a young girl sent to be a maid when her father, a tile painter, is put out of work. The novel follows her for two years while she works at the house and when she returns to her place of work ten years later. The novel is written from her viewpoint. The novel is set in Delft in 1664.The setting of a novel is very important. If a novel is set in a real place and the details are not correct, then anyone who has been there will notice the faults and the read will not be as satisfying as it might be. A lot of real places in Delft are mentioned in the novel such as the Oude LangenDjick, Molenport, Sciedam Gates, Rietveld Canal and Koe Gate. Chevalier does this mainly to give a realistic setting for the novel. She has evidently visited Delft to be able to give such detail on the layout of the streets, and also she might have looked at maps of the town. The main meeting place in the town was the market place. The market gossip was the way most news got around Delft and was spread mainly by the women doing their shopping or selling things. Anything that happens in Delft would almost certainly be passed around in this way, including the fact that Griet was going to be painted by Vermeer even though Griet did not even really know herself. In addition, Griet was worried that details of her relationship with Pieter would be spread around Delft. ...read more.

Griet is definitely attracted to Vermeer and shows this with similies when she describes his voice as "walking along the edge of the canal and unsure of my steps" His presence makes her very nervous and she is eager to please him. When he asks her questions and she does not know the right answer he gets annoyed easily. However, once she has got the idea he is happy to have someone else who shares his artistic eye and love of colour. He notices her artistic eye almost immediately when he first asks her about the vegetables in her kitchen. He asks Griet what colour the clouds are and she answers that they are white. Vermeer tells her this is wrong and shows her that there are lots of different ones. However he shows her little attention other than this and it makes Griet unhappy as all she wants is for him to be proud of her. He is selfish and never thinks of the consequences for Griet when he makes decisions, only the problems the might occur for himself. Griet herself thinks that she has a friend in Vermeer but she is not quite sure how. He is powerful in his way and strong in character. She said his voice was "Low and dark like the wood of the table I was working on". He is also a bit of a perfectionist and after spending hours painting in a map on the painting of 'Woman with a Pearl Necklace' simply paints it out, as it is what the painting needs. He pays great attention to detail and every little thing in one of his paintings has to be right before he will admit it is finished. He is very slow and his paintings are painstakingly done. Vermeer knows nothing about Griet's social background and shows his ignorance on this when he talks to Griet about ivory combs to tidy her hair when Griet knows she could never be rich enough to own such an item. ...read more.

She has learned to pinpoint emotions because of this, and can describe things into great detail. Griet is quite reserved and does not like to uncover her head as this might expose another side to her a more relaxed and wild Griet, a Griet that she does not want anyone else to see. When people see her hair in particular Vermeer it makes her feel like things don't matter anymore and she will dare to do anything. Griet is changed by her time with the Catholics and acts very differently after she has lived in their household. Her father said that the riches had "turned her head". Brought up as a Protestant, the riches of the Catholic lifestyle changed her. Chevalier also looked at the way she sets out the sections in the book. The novel is laid out in years, and smaller sections within the years. There are four years: 1664,1665,1666 and 1676. This gives a more realistic feel as chapters often show a more fictional story and showing the years makes it fell more real to us. Almost like a diary rather than a fictional work. People may wonder why Tracy Chevalier chose this painting in particular. Chevalier says "I had always loved that painting, I was attracted to the ambiguity of the expression, she is innocent and yet her mouth is open, yet at that time an open mouth was a sign of sensuality" It was a poster that she has had on her wall as a student and she says that "Within three days I had the whole story plotted out. It was effortless. It was all there in her face". Her love of the painting in a way would have helped and inspired Tracy Chevalier to create a plausible story. Chevalier uses a mixture of all the elements I have looked at and more to create a vivid and realistic story in 'Girl with a Pearl Earring' and with only the information given by the painting. 1 Emma Curtis UC4T 02/05/2007 English Coursework Essay ...read more.