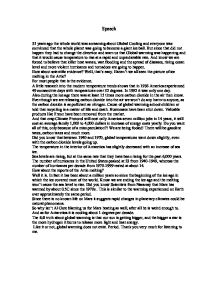 Speech 35 years ago the whole world was screaming about Global Cooling and everyone was convinced that the whole planet was going to become a giant ice ball. But since that did not happen they had to change the direction and warn us that Global warming was happening and that it would cause temperature to rise at a rapid and unpredictable rate. And know we are forced to believe that killer heat waves, vast flooding and the spread of diseases, rising ocean level and more violent hurricanes and tornadoes are going to happen. How about scientific evidence? Well, that's easy. Haven't we all seen the picture of ice melting in the Artic? ...read more.

Cause of global warming school children or told that recycling is a matter of life and death. Businesses have been shut down. Valuable products like Freon have been removed from the market. And that crap Climate Protocol will cost only America seven million jobs in 14 years, it will cost an average family 1,000 to 4,000 dollars in increase of energy costs yearly. Do you want all of this, only because of a miss peculation?! We are being fooled! There will be gasoline taxes, carbon taxes and much more. Did you know that between 1940 and 1970, global temperatures went down slightly, even with the carbon dioxide levels going up. ...read more.

Did you know Scientists from Nasa say that Mars has warmed by about 0.5C since the 1970s . This is similar to the warming experienced on Earth over approximately the same period. Since there is no known life on Mars it suggests rapid changes in planetary climates could be natural phenomena. So why isn't Al Gore blaming us for Mars heating as well, after all he is weird enough to. And as for Antarctica it is cooling about 1 degrees per decade. The full truth about global warming is that our sun is getting bigger, and the bigger a star is the more hydrogen it burns to release more light and heat energy. Like it or not, global warming does not exist. Period. Thank you very much for listening to me. ...read more.