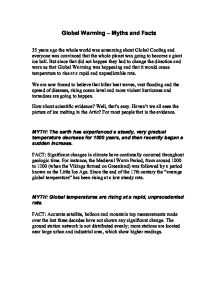 Global Warming - Myths and Facts 35 years ago the whole world was screaming about Global Cooling and everyone was convinced that the whole planet was going to become a giant ice ball. But since that did not happen they had to change the direction and warn us that Global Warming was happening and that it would cause temperature to rise at a rapid and unpredictable rate. We are now forced to believe that killer heat waves, vast flooding and the spread of diseases, rising ocean level and more violent hurricanes and tornadoes are going to happen. How about scientific evidence? Well, that's easy. Haven't we all seen the picture of ice melting in the Artic? For most people that is the evidence. ...read more.

FACT: Accurate satellite, balloon and mountain top measurements made over the last three decades have not shown any significant change. The ground station network is not distributed evenly; more stations are located near large urban and industrial area, which show higher readings. MYTH: Human produced carbon dioxide has increased over the last 100 years, adding to the Greenhouse effect, thus warming the earth. FACT: Carbon dioxide levels have indeed changed for various reasons, human or otherwise, just as they have over geologic time. Scientists from NASA say that Mars, with no humans, has warmed by about 0.5C since the 1970s, which is similar to the warming experienced on Earth over approximately the same period. MYTH: Computer models prove the CO2 increases will cause significant global warning. ...read more.

It constitutes about 0.37% of the atmosphere. MYTH: Receding glaciers and the calving of ice shelves are proof of global warming. FACT: Glaciers have been receding and growing cyclically for hundreds of years. Recent glacier melting is a consequence of coming out of the very cool period of the Little Ice Age. Ice shelves have been breaking off for centuries. Scientists know of at least 33 periods of glaciers growing and then retreating. MYTH: The earth's poles are warming: polar ice caps are breaking up and melting and the seal level is rising. FACT: True, in some places sea levels have been rising for some 6000 years. Not true in others. The earth is variable. Sea level monitoring in the Pacific (Tuvalu) and Indian Oceans (Maldives) have shown no sign of any sea level rise. We are being fooled! Like it or not, global warming does not exist. Period. Thank you very much for listening. ...read more.