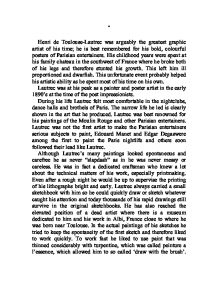 Henri de Toulouse-Lautrec Henri de Toulouse-Lautrec was arguably the greatest graphic artist of his time; he is best remembered for his bold, colourful posters of Parisian entertainers. His childhood years were spent at his family chateau in the southwest of France where he broke both of his legs and therefore stunted his growth. This left him ill proportioned and dwarfish. This unfortunate event probably helped his artistic ability as he spent most of his time on his own. Lautrec was at his peak as a painter and poster artist in the early 1890's at the time of the post impressionists. During his life Lautrec felt most comfortable in the nightclubs, dance halls and brothels of Paris. The narrow life he led is clearly shown in the art that he produced. Lautrec was best renowned for his paintings of the Moulin Rouge and other Parisian entertainers. Lautrec was not the first artist to make the Parisian entertainers serious subjects to paint, Edouard Manet and Edgar Degaswere among the first to paint the Paris nightlife and others soon followed their lead like Lautrec. ...read more.

This early example of Lautrec's caricature and graphic style shows the ringmaster and a bareback rider at one of the famous Montmatre circuses. The people at the Moulin Rouge thought so highly of the painting that it was hung in the dancehall from the opening night. The exaggerated features and silhouetted suit tails of the ringmaster make it look as if he has been cut out and stuck down in an appropriate position on the circus floor. I admired this painting because I liked the way he incorporated the sense of movement into the painting by firstly painting the horse when it was in the middle of a stride with its hooves in the air and secondly how he painted the rim of the circus in a curve, which gave a good effect. I was attracted to this painting because it is full of life and colour. Lautrec uses bright colours when he is painting the seating and the background, which contrasts with the relatively dull colours of the ringmaster and horse. ...read more.

The unidentified redhead sitting at the table is wearing an exotic headdress that stands out magnificently against her red hair. If you look at each person they each have a distinctive hat or hairstyle as Lautrec was fascinated by different styles of headwear. The mirrored background that lines the walls gives the painting an undefined background so the silhouetted figures stand out boldly in the mirror. I liked this painting because it shows the somewhat quiet of the normally busy Moulin Rouge. The way Lautrec contrasted the brightly painted woman and the redhead at the forefront of the painting with the blacks and browns of the background also attracted me. I also admired the way Lautrec maintained the spontaneity all through his work. My favourite painting of the two that I have talked about is 'At the Moulin Rouge' because I think that this one looks more difficult to paint than 'At the Circus Fernando' as it is in greater detail and most importantly I think it looks better. But take nothing away from 'At the Circus Fernando' as this is also a brilliant piece of art. ...read more.