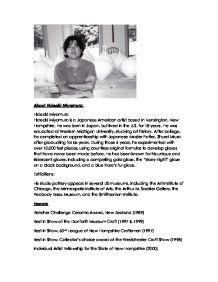 About Hideaki Miyamura: Hideaki Miyamura Hideaki Miyamura is a Japanese American artist based in Kensington, New Hampshire. He was born in Japan, but lived in the U.S. for 18 years. He was educated at Western Michigan University, studying art history. After college, he completed an apprenticeship with Japanese Master Potter, Shurei Miura after graduating for six years. During those 6 years, he experimented with over 10,000 test pieces, using countless original formulas to develop glazes that have never been made before. He has been known for his unique and iridescent glazes, including a compelling gold glaze, the "starry night" glaze on a black background, and a blue hare's fur glaze. Exhibitions: His studio pottery appears in several US museums, including the Art Institute of Chicago, the Minneapolis Institute of Arts, the Arthur M. Sackler Gallery, the Peabody Essex Museum, and the Smithsonian Institute. Honors: Fletcher Challenge Ceramic Award, New Zealand (1989) Best in Show at the Danforth Museum Craft (1997 & 1999) Best in Show, 63rd League of New Hampshire Craftsmen (1997) ...read more.

My goal is to try to evoke a feeling of inner peace and tranquility." Yohen Crystal Glaze During his 6 year apprenticeship in Japan, he completed over 10,000 test pieces to develop new glazes which combined crystallization with iridescence. He researched crystal glaze techniques in U.S., Europe, Japan and China, but was unable to find iridescent crystal glazes in their history. This motivated him to create an iridescent crystal glaze that has never been made before. It was during his 5th year of apprenticeship that he discovered the iridescent glaze on a black background, calling it "YOHEN CRYSTAL GLAZE", YOHEN meaning "stars glistening in a night sky". He claimed it being the most complicated glaze formula and firing process that he had ever done. What inspired the artist to create? His original interest in glazes aroused from Tenmoku glazes in ancient tea bowls developed in China during the Sung Dynasty, which no one has been able to reproduce. The tea bowls motivated him to experiment and create new iridescent glazes that have 3D quality, conveying inner feelings of purity and peacefulness. ...read more.

I think that this piece of artwork has a very unique color change, running from silver to gold, and again, along with shades of dark blue. As seen from the title, it is supposed to resemble a teardrop. With the shades of dark blue mixed with shades of black, I feel that the vase successfully resembles teardrops. The shape of the vase along with the colors makes it look smoother, while the curves of the vase reflects light, creating tone in the colors. The smooth texture further emphasizes teardrops, as the texture of water is not only smooth, but runny and reflects light, which is what this vase is able to portray. The light silver lines that run down also seems to act like silver walls, creating more angles of light. 4) Vase Materials: Porcelain Green Crystalline Glaze, Blue Hare's Fur * Miyamura's porcelain pieces reflect a fusion of Eastern and Western ceramic forms and traditions. His work is influenced by Scandinavian ceramic aesthetics. The use of crystalline elements in the glazes is European, but the traditional Tenmoku black glaze is rooted in Chinese forms. * The vessels themselves are objects of perfection and the glazes match their simple elegance. Sources: http://www.theharrisongallery.com/artistPage_tn.asp?conID=2772 http://www.puckergallery.com/miyamura.html http://www.miyamurastudio.com/about.html http://smithsoniancraftshow.org/ExhibitorContent/Ceramics5/Miyamura5.asp ...read more.