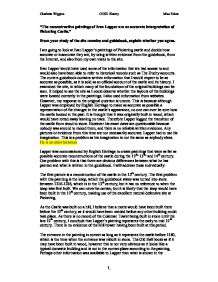 “The reconstructive paintings of Ivan Lapper are an accurate interpretation of Pickering Castle.”

From your study of the site remains and guidebook, explain whether you agree.

I am going to look at Ivan Lapper’s paintings of Pickering castle and decide how accurate or inaccurate they are, by using written evidence from the guidebook, from the Internet, and also from my own visits to the site.

Ivan Lapper would have used some of the information that we had access to and would also have been able to refer to historical records such as The Duchy accounts. The current guidebook contains written information that I would expect to be as accurate as possible, as it is sold as an official account of the castle and its history. I examined the site, in which many of the foundations of the original buildings can be seen. It helped to see the site as I could observe whether the layouts of the buildings were located correctly in the paintings. I also used information from websites. However, my response to the original question is unsure. This is because although Lapper was employed by English Heritage to make as accurate as possible a representation of the changes in the castle’s appearance, no one can ever be sure how the castle looked in the past. It is thought that it was originally built in wood, which would have rotted away leaving no trace. Therefore Lapper logged the transition of the castle from wood to stone. However his exact dates are questionable because nobody was around to record them, and there is no reliable written evidence. Any pictures or evidence from this time are not necessarily accurate. Lapper had to use his imagination. This is a problem as his imagination is not the same as anybody elses. He is an artist historian

Lapper was commissioned by English Heritage to create paintings that were as far as possible accurate reconstructions of the castle during the 12th, 13th, and 14th century. One problem with this is that there are obvious differences between what he has painted and what is written in the guidebook. I will address these individually:

The first picture is a reconstruction of the castle in the 12th century. The first problem with this painting is the keep, which the guidebook states was turned into stone between 1216-1236, which is in the 13th century, but it has no reference to when the keep was first built. We can never be certain, but it is likely that the keep would have been built in the 12th century, making use of the excellent natural defensive site at Pickering.

The entrance in the painting is correct as long as it represents the castle before 1180, which is the time when the entrance was rebuilt in stone. The Old Hall looks as if it may have been built in wood, however this is not very obvious as it looks like a typical domestic building and is not in the correct place according to the painting. Perhaps other information was available to Lapper than what is shown in the guidebook, but as a new edition of the guidebook must have been printed after Lapper had completed his paintings it seems likely that the information would have been edited to be as accurate as possible. The New hall, the Chapel and the Constables’ lodgings are not thought to have been built in the 12th century and are also not shown on Lapper’s reconstruction. The domestic lodgings in the inner ward are no longer shown. However there were likely to have been general purpose buildings inside the inner ward for those people who had to work in the castle. It is thought that the east turret, Rosamund’s tower and the Diate Hill Tower were not built until the 14th century. The Stables area is located on the plan of the Castle but has no dates, and the only other information from the guidebook is that they were likely to have been rebuilt in stone in the 15th century. Although no written evidence of stables has been found, I think that Lapper is right to draw them in, as the soldierswould have needed horses if attacking the enemy and for passing messages between castles. There is no evidence of a gatehouse until the 14th century, when the order for the building of a gatehouse was given in 1323.

In Lapper’s first painting he seems to be largely accurate, although it is obvious at some points he has had to use his own imagination to fill in gaps in the accounts of the castle. The details of the painting match closely with the guidebook, as large sections of the castle are not shown to have built in stone until the 13th century.

The second painting I am going to study is a reconstruction of Pickering castle in the 13th century. The Keep was built from stone between 1216 and 1236 so the painting does represent the castle after that time. The problem is that the picture was meant to show the early 13th century, but mid-13th century would be more accurate. Therefore either Lapper got this wrong or there is an error in the guidebook, which seems unlikely.

According to the guidebook, the Mill tower wasn’t built until the 14th century. However, in the painting of the early 13th century the mill tower is shown being built. My only suggestion for this is that Lapper wanted to show the transition of the castle through the ages.

The Old Hall was built in stone in the early to mid-12th century but is not illustrated in stone or in the right place until this painting. What does this mean? I can only suggest that he used some alternative sources for his interpretation. The Chapel was built in the early 13th century; this makes sense, as it was obviously a very important building to the many people living within the castle walls who would have been religious. The Constable’s lodgings are pictured; this is strange because in the guidebook it is written in as 13th/14th century, which would have probably meant the end of the 13th century or the beginning of the 14th century, but in that case why were the Constable’s lodgings shown in the reconstruction of the early 13th century. One of the main reasons for Lapper showing the constable’s lodgings in this period could have been that he was unsure exactly when the lodgings had been built. This was because they were not recorded in the Duchy accounts until the 15th century.

The domestic lodgings in the inner ward for those living in the castle can still be seen in the 13th century drawing, however there was no evidence of these buildings. They are likely to have been made of wood, if this was the case the remains would have rotten away.

I think Lapper’s reconstruction of the 13th century is generally accurate, but it seems there are some errors in his work. Perhaps with all the resources he had to hand we would understand why Lapper painted some things differently to the guidebook.

The third painting is a reconstruction of Pickering castle in the 14th century. The painting shows the Keep with stone foundations, these are likely to have been originally from the buildings that were used for storage of food and supplies. No one can be certain whether Lapper has drawn them in the correct place. However we know that he has drawn the shell keep, arrow slits, crenulations and walls running from the keep correctly as we saw these on our site visit.

According to the guidebook the mill tower was converted into stone by 1326. This means the tower should not have been shown in the painting from the beginning of the 14th century. The entrance to the site was turned into stone in the 13th or 14th century. However as it was not shown in the 14th century painting we must presume that Lapper had other evidence besides what the guidebook tells us. The New Hall wasn’t built until the 14th century. The New Hall was built to replace the Old Hall and was much larger than the old Hall (((Flags)))) (The Constable’s lodgings were already built in this painting but are not mentioned in the Duchy accounts until the 15th century.

The evidence of domestic buildings left from the 14th century are the two stone ovens, which were probably part of a brew house and a bake house.

The East turret, Rosamund’s tower and the Diate Hill Tower are now shown on Lapper’s paintings, this is correct to the best of my knowledge. A piece of evidence to support this are the large windows in the Diate Hill Tower, showing that the castle was built at a time when there was less of a threat from invasion. Similar features are found atBolton Castle, which was built in the late 14th Century, when the need for defensive castles was greatly diminished. It has large windows made of glass. It also has no separate outer walls and no keep. It was obviously built primarily as a domestic castle.

At Pickering the Diate Hill Tower has a large window however the king would not be expected to stay there during attack. If necessary he could leave the castle through the Sally Port in Rosamund’s tower.

I presume that the stables were built of wood, as there are no remains of foundations or stonework. It is difficult to understand why the Stables were not built in stone. The gatehouse was not built until the 14th century.

By the 14th century almost everything was made of stone for example the Gatehouse, the bridge and the Portcullis, which were obviously an important part of the castles defences. Lapper’s painting supports the order of the king for secondary defences in 1323, although this may not have been carried till after the king’s death in 1327.

I think that Lapper’s portrayal of the 14th century castle is very accurate. The only problems concern he constable’s lodging and why the stables weren’t rebuilt in stone.

In conclusion I think that lapper is about 90% accurate in his paintings. He obviously intended to draw the site as accurately as possible which makes the difference between the guidebook and the paintings difficult to understand. However I believe that he had access to historical documents and had also examined other castles closely for any clues, which would help him create a more complete image.