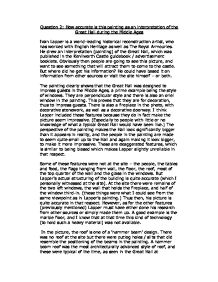 How accurate is this painting as an interpretation of the Great Hall during the Middle Ages.

Question 2: How accurate is this painting as an interpretation of the Great Hall during the Middle Ages Ivan Lapper is a world-leading historical reconstruction artist, who has worked with English Heritage as well as The Royal Armouries. He drew an interpretation (painting) of the Great Hall, which was published in the Kenilworth Castle guidebook / advertisement booklets. Obviously then people are going to see this picture, and want to see something that will attract them to come to the castle. But where did he get his information? He could have based it on information from other sources or visit the site himself - or both. The painting clearly shows that the Great Hall was designed to impress guests in the Middle Ages, a prime example being the style of windows. They are perpendicular style and there is also an oriel window in the painting. This proves that they are for decoration, thus to impress guests. There is also a fireplace in the photo, with decorative stonework, as well as a decorative doorway. I think Lapper included these features because they do in fact make the picture seem impressive. ...read more.

This makes the source more reliable and thus making Lappers painting more accurate. Also there is a source that mentions a hammer beam roof too, stated by John Drew, "Among his works was the building of the Great Hall with its fine hammer-beam roof,". Now, Drew is a local historian and has written several books on Kenilworth, and he is well known to exaggerate interesting features of the castle. His work is biased, as I can see from the source, which states, "John of Gaunt transformed the Castle into a fine palace". This proves that he is biased making the source unreliable, therefore making Lappers painting seem less accurate. Drew has even said that he "just looks for the good things" so that the castle sounds good. The window glass is no longer there at the site, but Lapper has drawn clear-glass windows with simple cross tracery designs. He could have used his imagination, or used source information. There is a source by Drew that states, "four large windows, filled with beautiful tracery and rich stained glass". Stained glass was also typical of the time, as seen at Caerphilly Castle in the 14th century. ...read more.

(Possibly to impress again.) From this evidence I have decided that Ivan Lapper has made a very inaccurate interpretation. The majority of the sources (and their authors) have poor reliability and this is partially the reason for the inaccuracy. The fact that Lapper even ignores the (although not many) factual sources just makes the reliability of painting awful, thus leading to awful accuracy. However, this is a historians opinion, and what 'bothers' me certainly will not bother a non-historian / tourist. I think this painting is more reliable to some people than it is to others. To a historian, I think this picture would be an insult, but that may be because historians are precise people. On the other hand, anyone (non-historian) who looks at the site after the picture will be impressed due to Lapper's clever accuracy on the structure of the building, but he clearly exaggerates the 'good bits' to impress the reader. Being aimed at tourists as well, the more impressive the picture, the more visitors the castle will have thus more profits, which is obviously the main goal. Conclusively, this painting to me is not a valid interpretation of the Great Hall because of the lack of accuracy, and I don't like the way the painting is made false just to get more profits. ...read more.