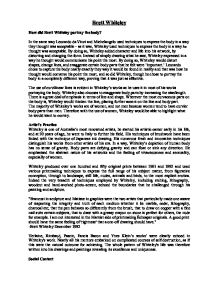 How did Brett Whiteley portray the body?

Brett Whiteley How did Brett Whiteley portray the body? In the same way Leonardo da Vinci and Michelangelo used techniques to express the body in a way they thought was acceptable - as it was, Whiteley used techniques to express the body in a way he thought was acceptable. By doing so, Whiteley added character and life into his artwork, by distorting and changing the form. Instead of simply drawing what he saw, Whiteley expressed in a way he thought would communicate his point the most. By doing so, Whiteley would distort shapes, change lines, and exaggerate certain body parts that he felt were 'important.' Leonardo chose to capture the body nearly exactly they way it would be found in reality and that was how he thought would converse his point the most, and so did Whiteley, though he chose to portray the body in a completely different way, proving that it was just as effective. ...read more.

Body parts are defying gravity and can float or sink any direction. He emphasised the abstract nature of his artworks and the feeling of vivaciousness and sensuality, especially of women. Whiteley produced over one hundred and fifty original prints between 1961 and 1992 and used various printmaking techniques to express the full range of his subject matter, from figurative conception, through to landscape, still life, nudes, animals and birds, to the most explicit erotica. Indeed the very breadth of techniques employed by Whiteley, including etching, lithography, woodcut and hand-worked photo-screen, echoed the boundaries that he challenged through his painting and sculpture. "Brancusi in sculpture and Matisse in graphics were the two artists that particularly made one aware of respecting the integrity and truth of each medium whether it be marble, cedar, lithography, charcoal etc; that the pen behaves so differently from the brush, that to draw on copper with a fine nail suits certain subjects, that to draw with a greasy crayon on stone is perfect for others, the nude for example. ...read more.

His work was shown at the Whitechapel and Marlborough galleries from 1961, and in that year he was selected to represent his country at the 'young Painters' Convention' UNESCO. Even more crucial to his future was his success in winning the International prize at the second 'Biennale de Paris' (International Biennale for Young Artists), which brought with it the excitement, glamour and disadvantages of world publicity in Paris. After 1961 he returned to Australia. What he learned from his contacts with such countries as Cambodia, Vietnam and Japan is expressed in his drawings and paintings, and even more in sculptures such as his 'Asia', a construction in fur, steel and acrylic in which a white wallaby was depicted with its head stuck in a sewerage pipe. During the 1979s he won a number of national prizes and settled at Lavender Bay. Whiteley continued to receive a number of awards for his artworks. His colourful life ended in the same nature; he committed suicide in a motel in NSW in 1992. ...read more.