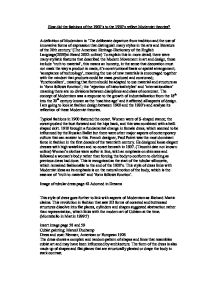 How did the fashions of the 1900's to the 1930's reflect Modernist theories? A definition of Modernism is 'The deliberate departure from tradition and the use of innovative forms of expression that distinguish many styles in the arts and literature of the 20th century.'(The American Heritage-Dictionary of the English Language(2000)in Beard 2002: online) To explain this in more detail, there were many stylistic features that described the Modern Movement in art and design, these include 'truth to material', this means an honesty, in the sense that decoration must not mask the way a product is made, it's constructional basis or spatial arrangement; 'acceptance of technology', meaning the use of new materials is encouraged together with the mindset that products could be mass-produced and consumed; 'functionalism', meaning that form should be adapted to use material and structure as in 'form follows function'; the 'rejection of historical styles' and 'internationalism' meaning there are no divisions between disciplines and class of consumer. The concept of Modernism was a response to the growth of industrialisation from the 18th into the 20th century known as the 'machine age' and it affected all aspects of design. I am going to look at fashion design between 1900 and the 1930's and analyse its reflection of these Modernist theories. Typical fashions in 1900 featured the corset. Women were of S-shaped stance; the corset pushed the bust forward and the hips back, and this was combined with a bell-shaped skirt. ...read more.

(Wollen 1999:11) These Oriental fashions linked with some of the modern design of the time and was seen as a part of the interest in 'novelty' in the 19th century. Novelty in this sense meant 'looking at things in a different way' and demonstrated designs interest in the Far East. Post-war clothing reflected women's changing roles in modern society, particularly with the idea of freedom for women. Women gained the right to vote in 1920 and were entering the workforce in record numbers. Forward-looking younger women now made sportswear into the greatest change in post-war fashion. The tubular dresses had now evolved into a similar silhouette that now sported shorter skirts with pleats, gathers or splits to allow motion to rule women's fashion. This shift towards functionalism again demonstrates Modernist theory as clothing and fashions became practical for a range of active bodily movements. Women wore 'flatteners' to have a more boyish bust and the waist disappeared. Chanel's designs took dominance and a new type of women came into existence- androgyny. This look was known as 'the Flapper' in America and embodied the modern spirit of the Jazz Age. Chanel androgyny image and analysis. Chanel's biographer, Edmonde Charles-Roux, states that Chanel was responsible for adopting sportswear to daily life and capitalizing on 'the feminising of masculine fashion'. Chanel created the 'poor look', the sweaters, jersey dresses and little suits. ...read more.

The Depression helped bring the clothes of the different classes together at least in general line and now a new process had begun which brought the creations of the great Paris houses within the reach of nearly every woman. Before 1930 buyers (especially American buyers) purchased several dozen copies of each selected model shown in Paris and resold them to a wealthy clientele. But after the slump American authorities imposed a duty of up to 90% on the cost of the original model. Toiles were allowed duty-free. Each toile was supplied with full directions for making it up and so a simplified version could be sold very cheaply. There was also the growing use of synthetic fabrics. Even the factory girl could now afford to purchase artificial silk stockings. (Costume and Fashion fill in***) These points reflect the Modernist feature of 'Internationalism'. Divisions between the classes of the consumer had minimised. Further Points Art and fashion link. Conclusion I think the fashions of the 1900's into the 1930's reflect many aspects of Modernist theory. Mass manufacturing, increased consumerism and the speed of change are all characteristics of the Modern period and these factors altered the fashion industry and trends. The rejection of historical styles has been evident, as I've studied the typical looks for each decade and the sweeping trends. Fashion trends, silhouettes and fabrics rapidly became old and fashionable women had to have the latest look in fashion. Modernism is characterised by the love of the new. The modern self is increasingly aware of itself, including it's appearance...(Entwistle p74) ...read more.