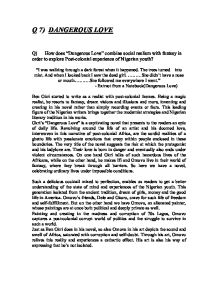 How does &quot;Dangerous Love&quot; combine social realism with fantasy in order to explore Post-colonial experience of Nigerian youth?

Q 7) DANGEROUS LOVE Q) How does "Dangerous Love" combine social realism with fantasy in order to explore Post-colonial experience of Nigerian youth? "I was walking through a dark forest when it happened. The trees turned into mist. And when I looked back I saw the dead girl. .........She didn't have a nose or mouth..........She followed me everywhere I went." - Extract from a Notebook(Dangerous Love) Ben Okri started to write as a realist with post-colonial themes. Being a magic realist, he resorts to fantasy, dream visions and illusions and more, inventing and creating in his novel rather than simply recording events or facts. This leading figure of the Nigerian writers brings together the modernist strategies and Nigerian literary tradition in his works. Okri's "Dangerous Love" is a captivating novel that presents to the readers an epic of daily life. Revolving around the life of an artist and his doomed love, interwoven in this narrative of post-colonial Africa, are the sordid realities of a ghetto life with passionate emotions that creep within people enclosed in these boundaries. The very title of the novel suggests the risk at which the protagonist and his ladylove are. Their love is born in danger and eventually also ends under violent circumstances. On one hand Okri talks of such hazardous lives of the Africans, while on the other hand, he makes Ifi and Omovo live in their world of fantasy, where they break through all barriers. ...read more.

Hence we see a new kind of imprisonment, the brutal savagery, on the part of the new masters of this neo-colonised nation. The title "Dangerous Love" does not merely refer to the doomed love of Omovo and Ifi but could signify the fate of love for the nation as well. Hence people like Omovo, suffer a complex experience of torment. They are victims of colonization, who remain victims even after decolonization. For instance, Omovo's friend Keme is a journalist, "always eager to prove himself". His ironic writing brings out the irony in him. So here we have these two, doomed and damned. The road they take to the park, metaphorically symbolizes freedom, a sense of exhilaration but it is short lived. Soon they reach the park and at this moment Omovo with "trouble gathering" over his shiny, baldhead, stumbles upon a dead girl, another "sacrificial victim". This episode, gives the readers a feeling of d�j� vu, due to the recurrence of the sense of the extract placed at the beginning of every section of the book. In fact this is a pitiful story of so many people, whose lives are covered by darkness created not by the setting sun alone, but arising out of their own predicament. The image of this dead girl continues to haunt Omovo, imposing upon his memory of the past, making him recall the brutality meted out to an old man and the girl, witnessed by him at the tender age of 9 and hence such cruelty and senselessness of it all appears more poignant to the reader. ...read more.

It also shows betrayal of the younger generation by the older one. Hence we see the need to move away from a world that is old, ugly and destroyed. It is not mere escapism, but they don't want to get submerged in the swamp they live in. Omovo often desires to form some sort of a link with his dead mother. This depicts his desire to move into the past but his inability to do so, suggests a loss of childhood, but in reality his generation has lost many things. Hence that sense of loss also, is observed in the novel. In fact the confiscated painting, itself spoke of these losses. Further, towards the conclusion of the novel, Omovo attempts to paint the girl's picture, but he cannot remember it distinctly and so the painting remains incomplete. However, this faceless painting suggests a universal face, giving that sense of people being lost in the middle of nothing, in the world. It is in this aspect that Omovo calls this painting "Related Losses", as it is the loss of one another, the loss of the girl and her physiology, and so on. To conclude, one could say, that this novel of disloyalty and vengeance, brings out the kind of nationalism that prevailed in post-independence Nigeria. This whole journey into darkness with a glimmer of hope to reach the light at the end was a difficult cycle to complete. Even so, "Dangerous Love" combines social realism with fantasy, exploring the post-colonial experience of the Nigerian youth. ...read more.