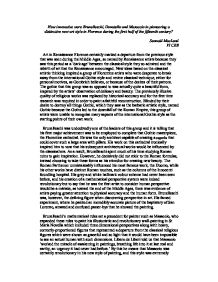 How innovative were Brunelleschi, Donatello and Masaccio in pioneering a distinctive new art style in Florence during the first half of the fifteenth century?

How innovative were Brunelleschi, Donatello and Masaccio in pioneering a distinctive new art style in Florence during the first half of the fifteenth century? Seonaid MacLeod VI CRB Art in Renaissance Florence certainly marked a departure from the previous style that was seen during the Middle Ages, so named by Renaissance artists because they saw this period as a 'dark age' between the classical style they so admired and the rebirth of art that the Renaissance encouraged. New ideas based on the classical artistic thinking inspired a group of Florentine artists who were desperate to break away from the international Gothic style and revive classical technique, either for personal motives, as Gombrich believes, or because of the desires of their patrons. The gothic that this group was so opposed to was actually quite a beautiful form, inspired by the artists' observation of delicacy and beauty. The previously illusive quality of religious works was replaced by historical accuracy and for the first time research was required in order to paint a faithful reconstruction. Blinded by their desire to destroy all things Gothic, which they saw as the barbaric artistic style, named Gothic because the Goths led to the downfall of the Roman Empire, this group of artists were unable to recognise many aspects of the international Gothic style as the starting points of their own work. ...read more.

By this he means that Masaccio was certainly revolutionary in his new style of painting, and this style was extremely influential on Florentine arts. Masaccio himself was inspired by Brunelleschi and Donatello, which tells us a lot about the influence of these artists. He combined Brunelleschi's perspective and Donatello's sense of intense humanity to create a picture of Man as an authentic individual, with passions and feelings. It was Masaccio's new ideas and combination of Brunelleschi and Donatello's ideas that led him to renovate the state of Florentine painting, which he recognised as stale and unoriginal. He took inspiration from the new ideas in sculpture and architecture to turn the Gothic style of painting around and this is why he is universally considered the 'founder of Renaissance Art'. His Cappella Brancacci frescoes are a perfect example of his concentration on the naturalistic revolution: to see space through the laws of perspective and his deep emotive intensity. Similarly, La Trinita is a work with a pictorial perspective that gives the illusion of space that does not actually exist. These illusionistic tricks are the trademark of Masaccio and he combined the works of his two friends, Donatello and Brunelleschi to create a truly innovative new art style. With this new art style, he influenced later artists such as Leonardo, Michelangelo and Raffaello, all of whom took pains to carefully reproduce the theory of perspective and use them in their own work. ...read more.

As we can see, these three artists were fundamental in turning Florentine art away from the international Gothic style that had dominated the art scene for so many years. Although they all started in the Gothic style, as they needed to experience art as it was before they could change it, the dramatic new styles that they pioneered later in their careers were instrumental in changing the style of Florentine art. It is arguable, however, just how much of a 'new' style that they created. By referring back to the art of the classical period, it is impossible to say that these concepts were completely original, as there were examples of using models, attempting to create proportionally perfect figures and studying nature for inspiration. It is safe to say that Brunelleschi's discoveries of perspective and the new grotesque sculptures of Donatello were indeed distinctive and revolutionary and that Masaccio's amalgamation of the ideas that were floating around at his time but never compounded until his work created an essential style of Florentine art had set a new precedent for artists such as Michelangelo to follow. In this, we can say that although they took ideas from the past, the new slants that these three artists placed on tired old ideas created a distinctive style that was to become the definitive Renaissance mode. ...read more.