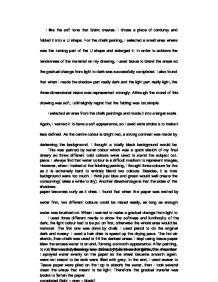 I like the soft tone that fabric creates. I chose a piece of corduroy and folded it into a U shape.

I like the soft tone that fabric creates. I chose a piece of corduroy and folded it into a U shape. For the chalk paining, I selected a small area where was the turning part of the U shape and enlarged it. In order to achieve the tenderness of the material on my drawing, I used tissue to blend the areas so the gradual change from light to dark was successfully completed. I also found that when I made the shadow part really dark and the light part really light, the three-dimensional vision was represented strongly. Although the mood of this drawing was soft, I still slightly regret that the folding was too simple. I selected an area from the chalk paintings and made it into a larger scale. Again, I wanted it to have a soft appearance, so I used wide strokes to make it less defined. As the centre colour is bright red, a strong contrast was made by darkening the background. ...read more.

I kept using tissue paper to rub them so they became less defined. While I was doing this, the areas that were not meant to be dark were filled with grey. In the end, I used eraser to clean the areas that meant to be light. Therefore the gradual transfer was completed (light - grey - black). The second drawing was done by pastel and I think it is the most successful one as it fully produced the smoothness and the shininess of the material (the material did not actually have this shininess, but I think it would be better if it was shining). I used several contrary colours such as green and reddish violet , blue and red, dark purple and light orange. The most interesting thing was this drawing was done a black card. Thus a tone of glowing in the dark was perfectly created. The one was done by colour pencils which was very similar to my final piece but it was cold colours on the left and warm colours on the right whereas the final piece was reverse. ...read more.

For the cold colour section, white, sky blue and back were mainly used to represent the curves. I mixed olive green with navy blue and a bit of black to build the background, so it pushed the rest standing out. For background of warm colour section, black was added to crimson to make it greyer. Whereas for the rest, white, yellow, orange and red were used. I used cross strokes to blend colours to make it looked more interesting. I think this painting is very successful, especially the gradual blending. It also appears to be unique, as it emerges from fragmentary images. However, I also think it is a pity that too much crimson was used in the warm colour section. It seems that the crimson does not combine with the other warm colours. Also, because of the time limit, it was slightly rushed towards the end. Red seems go well with blue. I stored the picture of this painting in my laptop by using a digital camera. Then I used Photoshop computer programme to see how would it look if other colours were combined. ...read more.