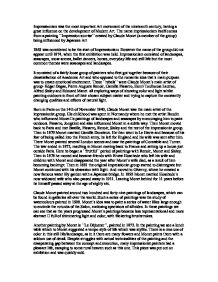 Impressionism was the most important Art movement of the nineteenth century, having a great influence on the development of Modern Art.

Impressionism was the most important Art movement of the nineteenth century, having a great influence on the development of Modern Art. The name impressionism itself comes from a painting ��Impression sunrise�� created by Claude Monet (a member of the group) being influenced by Japanese Art 1863 was considered to be the start of Impressionism. However the name of the group did not appear until 1874, when the first exhibition was held. Impressionism consisted of landscapes, seascapes, snow scenes, ballet dancers, horses, everyday life and still life but the most common themes were seascapes and landscapes. It consisted of a fairly loose group of painters who first got together because of their dissatisfaction of Academic Art and who opposed to the romantic idea that�s main purpose was to create emotional excitement. These ��rebels�� were Claude Monet�s main artist of group- Edgar Degas, Pierre Auguste Renoir, Camille Pissarro, Henri Toulhouse Lautrec, Alfred Sisley and Edouard Manet all exploring ways of showing color and light whilst painting outdoors in front of their chosen subject matter and trying to capture the constantly changing qualities and effects of natural light. Born in Paris on the 14th of November 1840, Claude Monet was the main artist of the impressionist group. His childhood was spent in Normandy where he met the artist Boudin who influenced Monet?s paintings of landscapes and seascapes by encouraging him to paint outdoors. ...read more.

Despite struggles with actual technicalities of the painting and the exasperating gap between the concept and execution, many impressionist painters had a pleasant life, escaping to some rural heaven such as this one. This piece was put out on exhibition and was quickly sold. Another member of the Impressionist group was Pierre Auguste Renoir. Born in 1841, Renoir originally trained as a porcelain painter and he made his transition from artisan to artist at the age of nineteen. Although there were many changes to style during his long career, Renoir always painted happier aspects of life, expressing joyful emotions. His paintings conveyed an impression of a dreamy and carefree world full of light and shimmering colors. Early on in his career, Renoir found the critics ponderously condemn his work but by the time he was forty he had established his name as a society portrait painter, painting ranges of portraits ? his friends relaxing and latterly nudes. Later on in life he became crippled by rheumatism and he moved to Rivera. However despite his illness he continued to paint until his death in 1919. ��The Umbrellas�� - painted in 1881 to 1886- is a typical Renoir painting with a theme taken from everyday life. The canopy of umbrella encloses the scene and makes the viewer part of the action. ...read more.

He influenced younger artists like Vuillard and Denis. Degas passed away in 1917 at the age of 83. Degas painted ?Dance Foyer at the Opera of the Rue Le Peletier? in 1872. He painted this as a result of the Japanese prints, where he had adopted an asymmetrical grouping in his work, in which the central area is empty. The scheme of this painting is of ?various whites gauzes and muslins, fluttering around the apartment? and the ballet master in the middle in ?white ducks and jackets?. All shifts of indoor light and color can be seen and the girls are all painted in some sort of movement ? some are strained and some in rest. This is expressed with the most perfect precision of drawing and delicacy of colors and is without a shadow of a shade, having the ballet for its subject. Another ballet picture painted by Degas is ��The Dancing Class��. This is an informal picture of a lesson in a rehearsal room. In it instead of depicting a famous ballerina in her costume for her role, Degas turns his attention to the day to day training of the anonymous young dancers in the chorus. In conclusion, it can be said that Impressionism didn't consist of artists who all had the same style and thoughts about painting but of those who agreed with the social, realistic attitude that an artists task is to record life in an unsentimental way. ...read more.