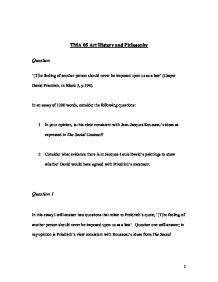 In my opinion is Friedrich's view consistent with Rousseau's ideas from The Social Contract. Question two considers what evidence there is in David's paintings to show whether he would have agreed with Friedrich's statement.

In the painting The Oath of the Horatii the arrangement of the figures is grouped into three sets. The group of soldiers on the left of the painting are the three Horatii. Each has an arm outstretched to the swords in the centre of the painting, those are held by the man in the centre. Behind him at the right of the painting is a group of three women and two children, their faces and poses display exhaustion. The most striking colours in this painting are the red shawls over the shoulders of the man in the middle and the silver of the three glistening swords he is holding. The viewer's eyes are instantly drawn to them. This is the intention as he is the most important person in the painting due to the fact that he is anointing them. Coincidentally the lines of perspective converge to the point that is at the base of his left wrist, the hand that holds the swords. I believe that from evidence taken from this painting, David would not have agreed with Friedrich's quote. This painting is set in Ancient Rome, a society that was oppressive, and did not encourage freedom of speech. This painting is highly political and displays severity due to the subject matter. It has three soldiers taking an oath upon swords, which are used to kill. ...read more.

The evidence in this painting suggests that David would have agreed with the statement made by Friedrich. The final painting I have chosen is David's The Death of Marat. It shows Marat, laying in the bath with his body slumped towards us. In his left hand he holds a note and in the other he holds a quill. Below his collarbone is the neat wound from a knife. This knife rests on the floor next to him for the spectator to see. The most striking colour in this painting is the white of Marat's body. The darkness of the background furthermore helps to distinguish him. The lights sweeps in from the above right, in doing so it catches the sheets in which he rests and also his face, shoulders and parts of his arms. David has depicted Marat as a hero; he casts him in rays of light and even rids him of his unsightly leprosy to make him more appealing. David who was a supporter of Marat wants the viewer to imagine a hero. So essentially this painting is intended for propaganda. I think that this propaganda painting is David's way of trying to force people to feel a certain way to by conveying an image that is inaccurate. Therefore this does not convey the message of agreeing with Friedrich's statement. In conclusion, I weighed up the evidence from The Oath of the Horatii, The Death of Socrates and The Death of Marat and I found two of them to be highly against Friedrich's statement. ...read more.