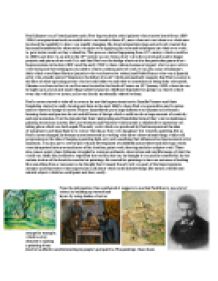 ï»¿Paul Cézanne was a French painter and a Post-Impressionist artist/painter whose career lasted from 1839-1906. An inspirational and successful artist was found in these 67 years where art was taken to a whole new level and the capibility to draw was rapidly changing. His observational drawings and artwork created the base and foundation for other artists to aspire to by applying his style and techniques into their own work, to get a better result, as they wished for. This process started happening from 19th century which would be in 1800’s and drew to an end in the 20th century as new forms of art were discovered and used in bigger projects and pieces of artwork. It is said that Paul was the bridge of artwork in the particular genre of art – Impressionism in the late 1800’s and the early 1900’s where cubism became a big part of art as new artists were trying out the techniques you need to create a cubism piece of work. It was also some of Cézanne’s idols which were Henri Matisse (an artist who was known for colour) ...read more.

Over the decade that their relationship and friendship formed they went on landscape painting excursions in areas like Louveciennes and Pointoise which meant a collaborative operation was taking place which was both equal. The early work which was produced by Paul incorporated the idea of using heavy and large figures to convey the idea as they were imaginary but created a painting. But as Paul’s career changed, he became more interested in working with direct observational things whilst still progressing on the idea of keeping a painting light, airy and something that influenced an Impressionist artist immensly. You also got to see the growth and development of solidified and architectural drawings which were interpreted into more and more of his sketches, paint work, drawing and also sculptor work. There also came a point where Cézanne struggled to create an authentic observation and real life image of what the world was really like, he liked to represent the world in the way he thought it was and he created this by the certain strokes of the brush he used in his paintings. ...read more.

Personally, I am really fond of Cézanne’s artwork as he really suggests to me that he is such a inspirational person who creates some sort of image and a piece of artwork that everyone will like and find captivating or even strange which in some ways could be effective as being different makes you stand out from the crowd. This can apply to someone being involved in art and whose oppucation evolves around the world of art which could mean someone having a particular style where they are specifically strong at giving off a message than could be inspiring and thoughtful just through a painting or a drawing which may or may not be famous and known across the globe. I enjoyed this task about finding information about this interesting artist as I think it is a great learning task where we can know about artists who have made up our generation and introduced news forms of art such as, Cubism, Impressionism, Expressionism and other types which are being newly-developed as our world and revolution of art progesses and changes. ...read more.