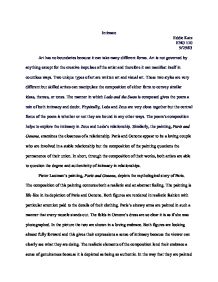 Intimate Eddie Katz ENG 110 9/29/03 Art has no boundaries because it can take many different forms. Art is not governed by anything except for the creative impulses of the artist and therefore it can manifest itself in countless ways. Two unique types of art are written art and visual art. These two styles are very different but skilled artists can manipulate the composition of either form to convey similar ideas, themes, or tones. The manner in which Leda and the Swan is composed gives the poem a mix of both intimacy and doubt. Physically, Leda and Zeus are very close together but the central focus of the poem is whether or not they are bound in any other ways. The poem's composition helps to explore the intimacy in Zeus and Leda's relationship. Similarly, the painting, Paris and Oenone, examines the closeness of a relationship. Paris and Oenone appear to be a loving couple who are involved in a stable relationship but the composition of the painting questions the permanence of their union. In short, through the composition of their works, both artists are able to question the degree and authenticity of intimacy in relationships. Pieter Lastman's painting, Paris and Oenone, depicts the mythological story of Paris. The composition of this painting connotes both a realistic and an abstract feeling. ...read more.

In the Greek myth, Paris eventually leaves Oenone for the more beautiful Helen and the composition of this painting hints at the restless nature of Paris and the fleeting quality of his relationship with Oenone. In the poem, Leda and the Swan, Yeats looks at intimacy in relationships but he does so in a different way. In Paris and Oenone, the viewer is led to believe that the couple has a healthy relationship until further scrutiny reveals that they do not. However, in Leda and the Swan the reader is never led to believe that Leda and Zeus share a happy or healthy relationship because their relationship is founded on a violent sexual assault. Instead, the question of intimacy surfaces in relation to whether or not Leda came to enjoy the closeness she shared with Zeus. In other words, the poem charts the changing dynamics of Zeus and Leda's relationship and the question arises as to what degree the intimacy described was shared. The composition of the poem is used to reflect the way the relationship shifted over time as well as Leda's doubts about her time with Zeus. Before the poem is even read it can be noted that it is composed in the style of a traditional sonnet. This form is traditionally thought of in reference to love poems and therefore from the very beginning a level of closeness is assumed. ...read more.

On the other hand, Leda initially resisted Zeus but ended up having an orgasm and possibly gleaning some of Zeus's vast reserve of knowledge. The poem forces the reader to confront whether or not the intimacy related was shared and to what degree it was shared. Yeats and Lastman, both use compositional elements to look at intimacy in relationships and to question its degree of authenticity. Yeats uses specific words to create a feeling. The diction of Leda and the Swan is precise and is used to reflect the varying quality of the relationship. Additionally, the compositional structure of the poem works to heighten the tension between Leda and Zeus. Lastman uses colors and symbolism to guide the viewer to a deeper understanding of the relationship that is depicted in the picture. Both artists use compositional structure, an abstract term, as a way to reveal some of the underlying questions in a relationship. Similarly, it is easier for a person to see the problems in their own relationships when they can look at them in an uninvolved way. When a person can remove themselves from their relationship and analyze it as they might do a painting or a poem, the problems are easier to see. However, intimate relationships are, by their nature, deeply personal which makes detached inspection nearly impossible. Yeats and Lastman are able to get around this problem by describing relationships that they are not part of and they are able to raise questions about the intimacy in these relationships. ...read more.