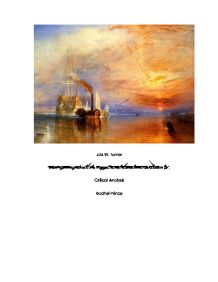 J.M.W. Turner The Fighting Temeraire tugged to her last Berth to be broken up. Critical Analysis.

Whilst achieving all of this he has instilled a sense of reality which keeps the audience engrossed from the very first glance. We can see that Turners relationship with his painting is quite intricate, and he has successfully endeavoured to evoke certain feelings and bring across a few messages to the viewer. One can see the inordinate power manifested in the little steam boat which is tugging the huge warship. The small tugboat seems to just ease its way through the calm and undisturbed water, mirroring the peacefulness of the entire landscape, and maybe even the peacefulness within Turner himself at the time of painting. It is inevitable that Turner had a sense of luminosity and vigour within him at this point in time, as he has conveyed this throughout his painting, especially through the powerfulness of the steam boat, and the intensity of the sunset. In Turners youth, he was moved to live with his Uncle on the river Thames due to a few family problems. ...read more.

This painting is my, and many others, favourite. The colours are just amazingly arranged into an incredible formation of strokes, creating an overall amazing painting. The sunset is by far my favourite bit of the landscape, it lures me in and I could stare at it for ever. Every time I examine the painting I find something new and different about his subjects, his use of colour or the way in which he has communicated his technique, which I didn't pick up on before. I love how it has a sort of solemn and soothing vibe on water, yet an effervescent and vibrant vibe existing within the sky. Turner's brushwork is amazing, using small whirling, and quick strokes to create the imitation of clouds and the sky, then a smooth glossy effect on the water. The more I look at it the more I appreciate the artwork and the artist, it truly is phenomenal. Rachel Prince. ...read more.