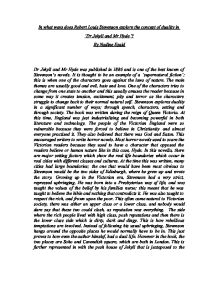 In what ways does Robert Louis Stevenson explore the concept of duality in 'Dr Jekyll and Mr Hyde'? By Nadine Esaid Dr Jekyll and Mr Hyde was published in 1886 and is one of the best known of Stevenson's novels. It is thought to be an example of a 'supernatural fiction'; this is when one of the characters goes against the laws of nature. The main themes are usually good and evil, hate and love. One of the characters tries to change from one state to another and this usually amuses the reader because in some way it creates tension, excitement, pity and terror as the characters struggle to change back to their normal natural self. Stevenson explores duality in a significant number of ways; through speech, characters, setting and through society. The book was written during the reign of Queen Victoria. At this time, England was just industrialising and becoming powerful in both literature and technology. The people of the Victorian England were so vulnerable because they were forced to believe in Christianity and almost everyone practised it. They also believed that there was God and Satan. This encouraged writers to write horror novels. Most horror novels used to scare the Victorian readers because they used to have a character that opposed the readers believe or human nature like in this case, Hyde. In this novella, there are major setting factors which show the real life boundaries which occur in real cities with different classes and cultures. At the time this was written, many cities had large boundaries; the one that would have been most obvious to Stevenson would be the two sides of Edinburgh, where he grew up and wrote the story. Growing up in the Victorian era, Stevenson had a very strict, repressed upbringing. He was born into a Presbyterian way of life, and was taught the values of the belief by his families nurse; this meant that he was taught to believe the bible and nothing that contradicts it. ...read more.

This also relates to Stevenson's own life, he lead a life with a varying hierarchy, high status by day and low status by night. Clearly, they are contradicting one another in terms of both appearance and characteristics. Jekyll is a doctor, who serves society and helps people whereas Hyde shocks people and doesn't really serve society positively. Another example is that Jekyll is described as good looking but Hyde is represented as having "no face" which is rather unusual. Because Hyde is never truly defined, it makes the reader think that there is something wrong with Hyde's personality, or Stevenson could be leaving Hyde's appearance to the readers' imagination. Since their appearances and characteristics are so opposed to one another, it only concludes to one thing- there are two sides to this. This goes onto saying that "man is not truly one, but truly two", meaning that although man is only one, he still has the two components which make him, him. They are good and evil also known as Jekyll and Hyde. Other characters of interest the book also represent some of the themes to the book, but more subtly. For example, in chapter one, Mr. Utterson and Mr. Enfield are described as unlikely friends because nobody could see what they shared in common, they would go on walks every Sunday and Set aside occasions of pleasure, but even resisted calls of business, that they might enjoy them uninterrupted. This links to Jekyll and Hyde because no one can see why they are associated with one another, such as Jekyll leaving Hyde everything in his will, but Utterson couldn't understand why. The hypocrisy of the hidden duality in the book is demonstrated not just through Jekyll and Hyde, but through other, fairly decent characters as well. Robert Louis Steven wrote Dr Jekyll and Mr Hyde in the 1900's. Stevenson was greatly influenced by his surroundings and the times. ...read more.

He carefully used the characters, plot and setting to show the many characteristics of the Victorian society he was living in. When Stevenson portrayed duality within people he tried to emphasise that we all have a darker side within ourselves. All humanity is like Dr Jekyll, trying to keep a Mr Hyde or evil side under control. Even though Robert Louis Stevenson wrote Dr Jekyll and Mr Hyde in the Victorian era the idea of duality is still significant in modern times. During Victorian times, people feared scientific progress by scientists if it was not controlled. Yet curiosity has always been a characteristic of humanity. This can relate to Dr Lanyon and Dr Jekyll's experiments. They were performed without any regulations and rules and therefore became dangerous.. Robert Louis Stevenson was writing about things that affected society when he was alive. His novel is so popular because the points he made are still relevant to society anytime and this is what makes this book great. He also compares the duality of man to that of good and evil. He shows however nice and perfect one can seem, they have a much darker side to them and that Dr Jekyll was merely grasping at his and getting to "walk on the wild side" so to speak. Another example is when he says that human beings are made purely of good and evil, " all human beings, as we meet them, are commingles out of good and evil" By using the word "commingled", it shows how purely mankind is double-sided, as if, goodness and evil has been weaved into our body. Another example used in reality is "two-faced". This comparison is taken as people having two different faces; good and evil. In my opinion, Stevenson's most effective way of exploring duality is through the setting. In all stories, setting is always the most important and significant part which always tells you something, and Stevenson's vivid descriptions of the setting just link perfectly into the Duality of Jekyll and Hyde. ...read more.