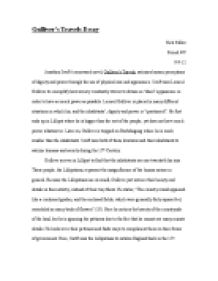 Jonathan Swifts renowned novel, Gullivers Travels, satirizes human perceptions of dignity and power through the use of physical size and appearance

﻿Gulliver?s Travels Essay Nick Miller Period 4W 9-9-12 Jonathan Swift?s renowned novel, Gulliver?s Travels, satirizes human perceptions of dignity and power through the use of physical size and appearance. Swift uses Lemeul Gulliver to exemplify how society constantly strives to obtain an ?ideal? appearance in order to have as much power as possible. Lemeul Gulliver is placed in many different situations in which his, and the inhabitants?, dignity and power is ?questioned?. He first ends up in Lilliput where he is bigger than the rest of the people, yet does not have much power whatsoever. Later on, Gulliver is trapped on Borbdingnag where he is much smaller than the inhabitants. ...read more.

Here, Swift uses the Lilliputians to satirize England back in the 15th Century. England, during those days, was one of the fast growing countries in all of Europe. Europe could stop the English by over powering them, just like Gulliver could overpower the Lilliputians if he chose to do so. Gulliver has a chance to seize some of the inhabitants by loosening ?the strings that tied down my hair on the left side, so that I was just able to turn my head about two inches. But the creatures ran off a second time?? (28). Because of their size, the Lilliputians can be compared to lesser people and are therefore more prone to have pity put upon them. ...read more.

Because the Brobdingnagians are bigger, Gulliver sees his own life as more insignificant than theirs. It is because of this mindset that Gulliver pays attention to more of the details on the Brobdingnagians physical appearance. The novel exemplifies the importance of physical appearance on the perception of one?s morals and standards. The size of the characters in the novel and the appearance satirizes the events that were happening within the government in the 15th Century. England was small and could have been easily crushed by the rest of Europe but was overlooked and England saw Europe as ?bigger? and therefore missed the morals that were hidden underneath the ?big? exterior. The satirical elements utilized by Jonathan Swift in his renowned novel, Gulliver?s Travels, demonstrates how physical appearance can alter human perceptions of dignity and power. ...read more.