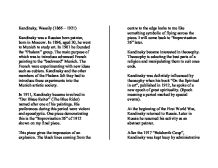 Kandinsky, Wassily (1866 - 1921) Kandinsky was a Russian born painter, born in Moscow. In 1896, aged 30, he went to Munich to study art. In 1901 he founded the "Phalanx" group. The main purpose of which was to introduce advanced French painting to the "backward" Munich. The French were experimenting with new ideas such as cubism. Kandinsky and the other members of the Phalanx felt they had to introduce these experiments into the Munich artistic society. In 1911, Kandinsky became involved in "Der Blaue Reiter" (The Blue Rider) named after one of his paintings. His preferences during this period were violent and apocalyptic. One piece demonstrating this is the "Improvisation 26" of 1912 shown on my final piece. This piece gives the impression of an explosion. The black lines coming from the centre to the edge looks to me like something symbolic of flying across the piece. I will come back to "Improvisation 26" later. Kandinsky became interested in theosophy. Theosophy is selecting the best parts of a religion and manipulating them to suit ones ends. Kandinsky was definitely influenced by theosophy when his book "On the Spiritual in art", published in 1912, he spoke of a new epoch of great spirituality. ...read more.

Kandinsky died in 1944. Below I have tried to recreate the effects Kandinsky created. Improvisation 26, 1912. This effect did not work. I wet the paper and used watery paint. Maybe thicker paint should be used or dry paper and watery paint. Also the colours used were too bright. Ziechen, 1925. This effect, I feel, did work. I used acrylic paints. I could improve the effect by dabbing the paint on instead of brushing. I think the colours possibly a bit too vibrant. The best effect I think I created is stuck onto my final piece. Mollesse dure, 1927. These effects worked okay. "Dabbing" effect - (See final piece), I feel I tried to put too much paint in one area and the outcome was very dark. The colours needed to be whitened to be paler. The background for the recreation piece worked okay although the colours were slightly wrong. The dabs of paint were a bit too spaced out. "Brushed" effect - This effect worked well but the colours could be more distinctive in their shades. Below I have also tried to recreate the effect. ...read more.

These are symbolic of objects flying from somewhere possibly an explosion that could end the world and be apocalyptical. The paint used is watery and smudged. This could resemble speed. I mean, when an object travels extremely fast, it is hard to see it clearly and looks blurred. The painting could refer back to when his painting themes were very violent and apocalyptic and these originated from German and Russian folk art. The atmosphere is very lively and the colours quite bright. I am quite pleased with my work. There are a number of things I could do to improve my work. > The background for the recreation piece could be improved by working on small areas at a time and using a smaller brush. > There should have been more recreational examples in this book. I disposed of a lot of the mistakes I made and instead I should have kept them and said why the effects didn't work. > My work could have been taken further. I have taken one picture, tried to recreate the effect and said why it did or didn't work. Instead I should have experimented with different medias and such like. > There should have been more work on the recreation page. ...read more.