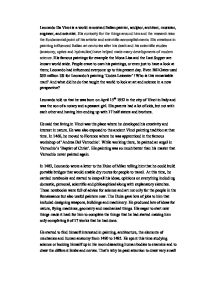 Leonardo Da Vinci is a world renowned Italian painter, sculptor, architect, musician, engineer, and scientist. His curiosity for the things around him and the research was the fundamental point of his artistic and scientific accomplishments. His creations in painting influenced Italian art centuries after his death and his scientific studies (anatomy, optics and hydraulics) have helped made many developments of modern science. His famous paintings for example the Mona Lisa and the Last Supper are known world wide. People crave to own his paintings, or even just to have a look at them; Leonardo had influenced everyone up to this present day. Even Bill Gates used $30 million US for Leonardo's painting 'Codex Leicester'! ...read more.

While working there, he painted an angel in Verrochio's 'Baptist of Christ'. His painting was so much better than his master that Verrochio never painted again. In 1482, Leonardo wrote a letter to the Duke of Milan telling him that he could build portable bridges that would enable dry routes for people to travel. At this time, he carried notebooks and started to keep all his ideas, opinions on everything including domestic, personal, scientific and philosophical along with explanatory sketches. These notebooks were full of advice for science and art not only for the people in the Renaissance but also useful painters now. The Duke gave lots of jobs to him that included designing weapons, buildings and machinery. ...read more.

With this determination, he came up with ideas including the bicycle, a helicopter, an "auto-mobile" and also some other ghastly weapons. His greatest study was water, he studied all the states of water from liquid to steam to ice. He thought of plans to make a machine that could measure humidity and also another machine that could be powered by flowing water. Leonardo recognised that levers and gears could do a lot of things. Gears were almost in half of his inventions from the crane to the helicopter. Leonardo's most famous painting is the 'Mona Lisa'. No one knows the secret story of the woman in the picture. Some say that she was smiling because she was pregnant but evidence has proven that the Mona Lisa was probably his self portrait! The 'Last Supper' is also a famous painting. http://www.geocities.com/kavid.geo/leonardo/bio.html http://education.yahoo.com/reference/encyclopedia/entry?id=27750 ...read more.