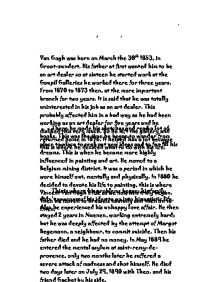 Life and influences Vincent Van Gogh (1853-1890) Van Gogh was born on March the 30th 1853, in Groot-zundert. His father at first wanted him to be an art dealer so at sixteen he started work at the Goupil Galleries he worked there for three years. From 1870 to 1873 then, at the more important branch for two years. It is said that he was totally uninterested in his job as an art dealer. ...read more.

There he made his sketches and read a lot of books. This was the time he began to wonder from place to place to seek out new ideas and to for fill his dreams. This is when he became more highly influenced in painting and art. He moved to a Belgium mining district. It was a period in which he wore himself out, mentally and physically. ...read more.

He then stayed 2 years in Nuenen, working extremely hard; but he was deeply affected by the attempt of Margot Begemann, a neighbour, to commit suicide. Then his father died and he had no money. In May 1889 he entered the mental asylum at saint-remy-de-provence, only two months later he suffered a severe attack of madness and shot himself. He died two days later on July 29, 1890 with Theo. and his friend Gachet by his side. I feel that he had no one as an influence but maybe a hade full of friends and his main influence himself. ...read more.