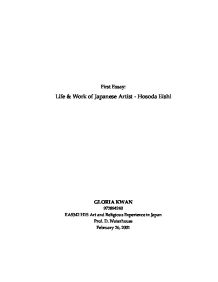 First Essay: Life & Work of Japanese Artist - Hosoda Eishi GLORIA KWAN 972894240 EAS342 H1S Art and Religious Experience in Japan Prof. D. Waterhouse February 26, 2001 The Japanese art form of woodblock printing, Ukiyo-e, is the most universally known form of Japanese art. It originated in the mid-seventeenth century and lasted through the mid-nineteenth century. This time period is described as the Edo Period. Hosoda Eishi was one of the artists in Ukiyo-e School. He has done pieces in both printing and woodblock printing. To understand and gain respect for the art of Hosoda Eishi, we need to talk about Ukiyo-e. In essence, Ukiyo-e reveals much of the rich history of Japan. This paper will first talk about the background of Hosoda Eishi, then an overview of Ukiyo-e and the works of Eishi will be covered. Eishi (Chobunsai) Hosoda Eishi Hosoda, also known as Chobunsai, was born in 1756 as the son of a noted Samurai family. He was the eldest son and his future was assured in the form of an annual stipend from the shogun (Evan 1975). ...read more.

Unlike most of the ukiyo-e artists, who were typically born into the merchant class, Eishi was born into a noted samurai family. Eishi's early prints date from the period of Kiyonaga's dominance, yet already reveal a refined sweetness that was to remain his trademark (Percival 1978). Like his later mentor Utamaro's work, Eishi's work was devoted principally to designs of beautiful female figures, whether courtesans of the Yoshiwara or idealized maidens in idyllic surroundings. His women are refined, elegant, quiet, and like a doll, they are motionless. Eishi's women do not show their feelings. It is said, that was because Eishi was a samurai, his view of women was strongly influenced by the ideal of samurai women (Percival 1978). He was also a master of erotica. Eishi was not only one of the most successful and popular artists of his day, but was also a very influential teacher who had many pupils and followers. History of Ukiyo-e "Ukiyo-e" is traditional wood-block printing art of Japan. The appealing art of the Ukiyo-e woodblock print is undoubtedly the most universally known of all Japanese arts. ...read more.

Some of the popular art pieces by Eishi are "The Thirty-Six Immortal Women Poets" which is a poetry album with illustrations by Eishi, "Shizuka in the Shizutama-ya", which was made around 1794 or 1795 when his art was at its best. It is from the set, "Six Select Beauties in the Gay Quarters (Seiro Bijin Rokkasen)", "Courtesan on a Spring Evening" and "Oiran with Two Kamuro Strolling under a Cherry Tree" were both handscrolls with ink and colour on silk. Some woodblock prints like "Kisen Hoshi", from the series "Six Immortal Poets", Echizenya Morokoshi, from the series "Six Beauties from the Pleasure Quarter" and "Hanogi, Yoshino and Tatsuta" from the Ogiya Establishment are example of the work by Eishi. Conclusion In Japan, painting is the preferred artistic expression practiced by amateur and professional alike. Until modern times, the Japanese wrote with a brush rather than a pen, and their familiarity with brush techniques has made them particularly sensitive to painterly values. Undoubtedly, the artwork of Eishi and the influences of Ukiyo-e on him have been significant in the history of Japanese art. ...read more.