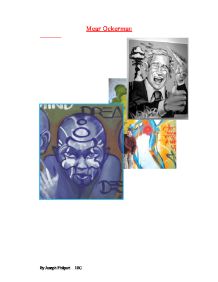 Mear Ockerman. His art work has taken him many places and now he is known in New York and Los Angeles Times. One of his famous pieces has been placed on the front cover of one of the Rolling Stones magazine

Mear Ockerman He was born in a single parent home in 1971, in Santa Cruz, Californi. He was taught on the streets of Los Angeles. At a young age, Mear chose to take the artistic path of life. His mother was also an artist. She drew and painted on the floor of their apartment. Because of his ability at art, his mother, an artist herself, pushed Mear into entering competitions. This worked very well. He learned new arts of art and became a more competitive person. Because of the financial problems Mear and his mother faced, he began to explore other ways in which to practise and improve his art technique. He learned to use the resources available and use sharp eyes to produce many different mediums. ...read more.

The cpublic nature of graffiti accepted him as one of them because of his rebellious graffiti artwork. A man named Skate one noticed Mear's potential and took him under his wing and taught him new ways in getting his name on walls. The two of them became very good friends and tried many new things including drugs, moving from place to place and getting into many street fights. This increased his creative mentality and made his art work improve. Not long before he was meant to graduate from high school, he dropped out and went to work. He provided himself with work as a paying artist to pay for his amenities. From that moment on, Mear relised that graffiti wasn't all about fun and games but it was a serious art form. ...read more.

He has travelled the world and has been features in Europe, Japan, North America and many other places to show his paint murals. Mear is currently the art director of a charity group, Reaching to Embrace Arts. This charity provides equipment for inner-city students in Los Angeles to inspire other young artists Not only has his carrer taken him many places, in the last sixteen years, Mear has been involved as a member and one of the founders of a designer in Con and Chaotic art. I personally enjoy Mear's artwork because it shows imagination and creativity. He has come up from nowhere and worked hard to achieve what he has today. Even now, he is helping young people who were in the same position as himself, many years ago, to work for there dreams in becoming an artist in graffiti. ?? ?? ?? ?? By Joseph Philpott 10C ...read more.