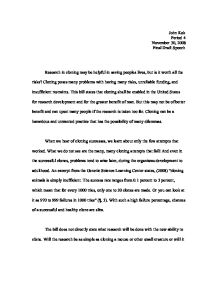 John Kok Period 4 November 30, 2008 Final Draft Speech Research in cloning may be helpful in saving peoples lives, but is it worth all the risks? Cloning poses many problems with having many risks, unreliable funding, and insufficient restraints. This bill states that cloning shall be enabled in the United States for research development and for the greater benefit of man. But this may not be of better benefit and can upset many people if the research is taken too far. Cloning can be a hazardous and unwanted practice that has the possibility of many dilemmas. ...read more.

An excerpt from the Genetic Science Learning Center states, (2008) "cloning animals is simply inefficient. The success rate ranges from 0.1 percent to 3 percent, which mean that for every 1000 tries, only one to 30 clones are made. Or you can look at it as 970 to 999 failures in 1000 tries" (�, 3). With such a high failure percentage, chances of a successful and healthy clone are slim. The bill does not directly state what research will be done with the new ability to clone. ...read more.

Many organizations may not want to fund a program with a high failure rate and complications during development. With the cloning organization only relying on private fundraisers for income, the research could easily be abandoned due to insufficient funds. With all the risks of cloning, enacting this bill may not be of greater benefit for man. Problems such as unreliable funding, risky testing, and insufficient restraints make cloning an unwanted practice that should probably only be used for minor testing. Cloning is a field of study that should keep to only working with small areas of research that do not involve any unethical tests. ...read more.