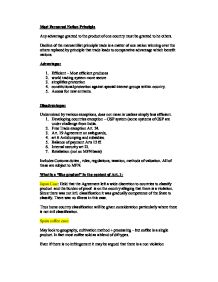 Most Favoured Nation Principle Any advantage granted to the product of one country must be granted to he others. Decline of the mercantilist principle trade is a matter of one nation winning over the others replaced by principle that trade leads to comparative advantage which benefit nations. Advantages: 1. Efficient - Most efficient produces 2. world trading system more secure 3. simplifies protection 4. constitutional protection against special interest groups within country. 5. Access for new entrants. Disadvantages: Undermined by various exceptions, does not mean is useless simply less efficient. 1. Developing countries exception - GSP system (some systems of GSP are under challenge from India. 2. Free Trade exception Art. 24. 3. Art. 19 Agreement on safeguards, 4. art 6 Antidumping and subsidies. 5. Balance of payment Arts 12 ff. 6. Internal security art 21. 7. Retaliation (not on MFN basis) Includes Customs duties , rules, regulations, taxation, methods of valuation. All of these are subject to MFN. What is a "like product" in the context of Art. 1: Japan Case: Held that the Agreement left a wide discretion to countries to classify product and the burden of proof is on the country alleging that there is a violation. Since there was not intl. ...read more.

Internal Regulators subject to Art I - Art. III 2) Art. III also ...... pressures tax value of the tariff binding Art. III. 3) Art. III , Art. XI complementary as Art. XI relates to borders measures. Art. III are internal measures. A product banned at the borders which does not meet on internal measures is under Art III. 4) Relationship with Gatt coexist Canadian newspaper case. Art III aimed at protecting expectatives of competitive relationship between export and domestic products. To avoid protectionism + to create equality of competitiveness between imports + competitive products. - As a consequence, no need to show that legislation caused effects, simply that it is discriminatory. - What is looked for is substantive equality not just formal equality (tries to reduce indirect discrimination) not simply on its forms. In effect it must not discriminate. - Differences in treatment may not mean a violation if used to equalise competitive environment. - Does not matter of it is a small difference once it is discriminatory it is a violation . Italian Discrimination against imported machinery case. Give benefits to legal persons who bought local machines. Italy stated that this was about helping local economic producers. Held this may be valid, but the help was given to purchasers, and was nonetheless discriminatory and a violation. ...read more.

In excess of 1) Like Products: Must be construed strictly. Factors include use, consumers taste properties nature + quality of the product. Tariff classification-not determinative as each developing countries may have wide brands of classification. 2) In excess of: not conditional on showing trade effects, even the smallest discrimination/ harm is sufficient. Second sentence discrimination: Test has three elements: 1) Are they directly competitive or substitutable. 2) Are they not similarly taxed 3) Is the tax applied so as to different protection/protectionism to the domestic product. Canadian Periodical Case WT/DS31?AB?R or DSR 1997 : Vol 1 449 Do the two products compete in the same segment of the market? ........... not have to be substitutable) Mi....... statements revealed protectionist aims fact. Not similarly taxed: 1) Must prove that it is .... 2) Must be more than a de minimis amount 3) The ....... Is separate from the third issue- would have ..... should protectionism as a different element. (panel had put the two together the App. Body separated those two elements-similarly taxed +protectionism=diff test) So about protectionism: Intention of legislation is irrelevant. It will made objective analysis of design + structure of statute. Magnitude of dissimilar tax, diff methods of the tax. Held (2) agreed with panel that tax was discriminatory against foreign whisky+ vodka. They were like product and had taxed them in excess in comparison with loal liquor, which were directly competitive. Violation as not similarly taxed so as to afford protection. ...read more.