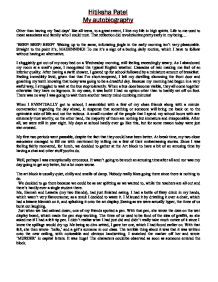 Hitiksha Patel My autobiography Other than having my 'bad days' like all teens, to a great extent, I live my life in high spirits. Life to me used to mean associates and family who I could trust. That reflection did revolutionize pretty early in my being... 'BEEP! BEEP! BEEP!' Waking up to the same, infuriating jingle in the early morning isn't very pleasurable. Straight to the point it's, MADENNING! To me it's a sign of a boring daily routine, which I have to follow without having an alternative. I sluggishly got out of my cosy bed on a Wednesday morning, still feeling exceedingly weary. As I abandoned my room at a snail's pace, I recognized the typical English weather. Cascades of rain making me feel of an inferior quality. After having a swift shower, I geared up for school followed by a miniature amount of breakfast. Feeling incredibly livid, given that that I'm short-tempered, I left my dwelling slamming the front door and gnashing my teeth knowing that today was going to be a dreadful day. Because my morning had begun in a very awful way, I struggled to wait at the bus stop tolerantly. When a bus does become visible, they all come together otherwise they have no legroom. In my case, it was both! I had no option other than to hastily set off on foot. There was no way I was going to wait there another twenty mind-numbing minutes! When I EVENTUALLY got to school, I assembled with a few of my close friends along with a minute conversation regarding the day ahead, in suspense that something or someone will bring me back on to the optimistic side of life and not the tedious. A small number of the people that I spend my school hours with are extremely trust worthy, on the other hand, the majority of them are nothing but immature and irresponsible. ...read more.

We were very petrified; generally because of our parents finding out and another because we knew Ms Tooley was going to get involved. The head of year was fuming and anybody could tell she was in a bad disposition. She started the conversation off by telling us how angry she was with us and that the three of us were caught by the CCTV cameras going in and out of the art block. She also mentioned that the caretaker saw us. COME ON! We looked at the camera before we went in the art block and after we come out, it was facing down on the floor. What nonsense! There was definitely no caretaker in the art block because both the classrooms were locked and I'm sure he wasn't hiding behind the door for fifty minutes without moving around. She told us to come clean, and not to lie. She also said that she knew it was us and our parents will be told all about this by sending a letter home and a phone call. The head of house said that the damage that we created was going to cost them a lot to refurbish and that this matter will be taken forward in the hands of Ms Tooley our head teacher. Hannah and Latasha finally decided to tell the truth and said that they were very sorry for doing such thing. It was only me that was left to make an apology. Because I took another ten more minutes, the head of year screamed at me and told me how ridiculous I was. Well that was something she didn't get wrong. After my two friends had admitted it, there was me still lying away! I carried on lying because I knew that I was going to be in serious trouble and that my parents were not going to be very pleased. It came out of my mouth in the end. ...read more.

The next day went similar to the first one; the only dissimilarity was that I was by my self. There was me thinking its all-over and done...there was more to come. We were forced to scrub off the graffiti from the ceiling. It was excruciating and exhausting. It took us four days and the most unpleasant thing is that we had to spend our lunchtime in there. We had to get on a chair and scrub it off which killed our backs. After doing that we no longer had energy for our next lesson. They also made us take the display down and put a new one up! They basically used us because since it was the beginning of the year they had to put up a new one. What I found very rude was that when we had completed scrubbing off the scribble, they covered it up with a big piece of material, which they could have done in the first place. Every lunchtime, the art block was always closed for about one and a half years. It had a sign up saying that it was closed due to graffiti. It was somewhat shameful every time we read it and most of the people knew it was us since news travels fast. After experiencing that, I have become much more mature since the teachers attitudes have really deformed towards us. We have learnt not to do things like that since it will take you off beam. I have also learnt not to lie because if you lie you won't be able to stop and you will just have to keep on going. When I look back at that situation, I really regret it and find it unbelievable. I've changed so much that nobody would think I'm the type to do such thing. Every time my friends and me go into the art block, we end up talking about it or blaming each other. I would never ever do such a thing again because it causes nothing but trouble and further more ruins your reputation. ...read more.