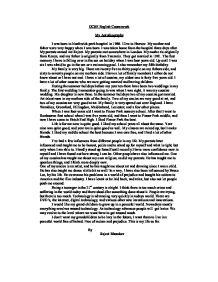 GCSE English Coursework My Autobiography I was born in Northwick park hospital in 1986. I live in Harrow. My mother and father were very happy when I was born. I was taken home from the hospital three days after. My parents named me Rajeet. My parents met somewhere in London. My mothe ris originally from Kenya, and my father is originally from Tanzania. They got married in 1981. The first memory I have is falling over in the sea on holiday when I was four years old. Up until I was six I was afraid to go in the sea or a swimming pool. I also remember my fifth birthday. My family is very big. There are twenty five to thirty people on my fathers side, and sixty to seventy people on my mothers side. ...read more.

I have Wembley, Greenford, Hillingdon, Maidenhead, Leciester, and a few other places. When I was four years old I went to Pinner Park nursery school. After that I went to Roxbourne first school when I was five years old, and then I went to Pinner Park middle, and now I have come to Hatch End High. I liked Pinner Park the best. Life is for me now is quite good. I liked my school years all about the same. Year nine was quite good, and year ten is quite good as well. My classes are mixed up, but I make friends. I liked my middle school the best because I was care free, and I had a lot of other friends. ...read more.

I have learnt ot be laid back, and relax, but also not let people push me around. Being a teenager in the 21st century is alright. I think there is too much crime and suffering in the world today and there should be something done about it. People are trying, but there is too much. Technology is advancing very quickly in todays world. There are DVD's, the internet, digital technology, and various other new inventions and innovations. I would like my grand children to grow up in a peaceful world. Nowadays mostly everything revolves around technology. As technology advances people will get lazier. We may evolve to the level where we wont have to get around much. I don't want my grandchildren to be lazy in the future, I want them to live in a peaceful world free of hatred. Free of racism and prejudice. This is my life so far. By Rajeet Bhumber ...read more.