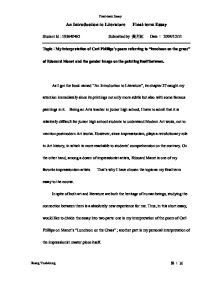 My interpretation of Carl Phillips's poem referring to &quot;luncheon on the grass&quot; of Edouard Monet and the gender image on the painting itself between.

An Introduction to Literature Final-term Essay Student Id : 193640462 Submitted by ??? Date: 2004/12/11 Topic:My interpretation of Carl Phillips's poem referring to "luncheon on the grass" of Edouard Monet and the gender image on the painting itself between. As I got the book named "An Introduction to Literature", its chapter 27 caught my attention immediately since its printings not only more subtle but also with some famous paintings in it. Being an Arts teacher in junior high school, I have to admit that it is relatively difficult for junior high school students to understand Modern Art woks, not to mention postmodern Art works. However, since impressionism, plays a revolutionary role in Art history, in which is more reachable to students' comprehension on the contrary. On the other hand, among a dozen of impressionist artists, Edouard Manet is one of my favorite impressionism artists. That's why I have chosen the topic as my final-term essay to the course. In spite of both art and literature are both the heritage of human beings, studying the connection between them is a absolutely new experience for me. Thus, in this short essay, would like to divide the essay into two parts: one is my interpretation of the poem of Carl Phillips on Manet's "Luncheon on the Grass" ; another part is my personal interpretation of the impressionist master piece itself. Firstly, I do believe for most of us would agree with that saying that one's life background and personality do have influences on ones' work, which is obviously a true in both art and literature. ...read more.

As a heterosexual, I sometimes, feel uncomfortable with homosexual. Before knowing the poet's background, I instinctively feel the poem is involved with implication on sex. Despite the paining is regarded as the beginning of impressionism nowadays, it brought Edourard Manet countless critique and abuse at the time. The conflict was started with "dress" and "undressed" problem. The nude female looks at readers with confidence, she acts as if she was an invisible spirit in the scene. The back part of the painting beyond the three people is a woman as well. We can see Manet adopted a lot of contrast in his work then, both on the subject themselves and background details. With black and nearly white color, eyes contact among the characters in the painting. We could see how good Manet's design is. However, in Carl Phillip's interpretation on this Manet's work, Carl which At Furthermore, Carl left his opinions on the world on the last line with " My dear, this is not art; we're not anywhere close to Arcadia" He seems pessimistic toward romance in the world, which I think it implied his frustration of his sexual orientation. He hided his passion in poem, which is not as courageous as Edouard Manet-the French painter. Edouward Manet, a French painter is considered to be the senior among impressionist artists. He liberate the contents by his brushstrokes on his paintings. ...read more.

However, none of them are really concentrated on teach other. The most controversial character is the nude female. She is looking at audiences calmly as if she is asking us. What are you doing here? What are you looking at? As for another female, she seems enjoying her bath in a pond; she doesn't care for the others at all. As John Berger mentioned in "ways of seeing"- We are always looking at the relation between thing and ourselves.(John Berger, p 9). As I saw the painting, I feel that same gender as I am , women is degraded in the painting. I think it's unfair for women undress and even nude are viewed as innocent and beautiful symbol. And seldom of us could appreciate nude male in artists' work. If we look back the development of Art History, we shall find the interesting part. After understanding Carl Phillips' background and Edouard Manet's background, we could see the diverse views on the world. Edouard Manet's "luncheon on the grass" does break the tradition thinking way at the time which led me an self-examination on my view toward Art history. Same as reading Carl Phillips' poem this time, I think I should hold a boarder view to accept his homosexual perception on the world. Referances 1 John Berger , Ways of Seeing . The Viking Press, 1972. p7-154. 2. An Introductiob to Literature by Sylvan Barnet, William Burto , and William E. CainPearson Longman. P854-855. 3. Art Journal, Winter, 1993 by Steven Z. Levine http://www.findarticles.com/p/articles/mi_m0425/is_n4_v52/ai_14970157/pg_3 4. http://www.essentialart.com/acatalog/Edouard_Manet_prints_Luncheon_on_the_Grass.html 5. http://sunsite.tus.ac.jp/wm/paint/auth/manet/ 6. http://www.redflag.org.uk/frontline/ten/10manet.html 7. http://www.artandphysics.com/c_main2b.html Final-term Essay Huang Yueh-hung ? 1 ? ...read more.