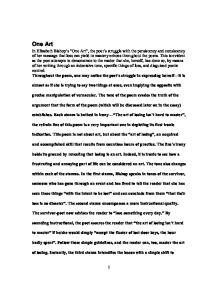 One Art In Elizabeth Bishop's "One Art", the poet's struggle with the persistency and consistency of her message that loss can yield to mastery echoes throughout the poem. This is evident as the poet attempts to demonstrate to the reader that she, herself, has done so, by means of her writing through an indecisive tone, specific things of loss, and disguised poetic control. Throughout the poem, one may notice the poet's struggle in expressing herself-it is almost as if she is trying to say two things at once, even implying the opposite with precise manipulation of vernacular. The tone of the poem evades the truth of the argument that the form of the poem (which will be discussed later on in the essay) establishes. Each stanza is bathed in irony-"The art of losing isn't hard to master", the refrain line of this poem is a very important one in depicting its first ironic indication. This poem is not about art, but about the "art of losing", an acquired and accomplished skill that results from countless hours of practice. The line's irony holds its ground by revealing that losing is an art. Indeed, it is ironic to see how a frustrating and annoying part of life can be considered an art. The tone also changes within each of the stanzas. In the first stanza, Bishop speaks in tones of the survivor, someone who has gone through an event and has lived to tell the reader that she ...read more.

After going through so much in the first five stanzas, she needs to take a breath before coming to her final conclusion. Decides to surrender her denial by using "love"--a powerful word, used to demonstrate a love she has for a certain gesture. In the last three lines, "I shan't have lied" reveals that she has indeed been denying this whole time that "the art of losing's not too hard to master/though it may..." The words "too", "though", and "may" are excuses the poet uses to make up for her denial. The examples of potential things to be lost presented in the poem are used to support the poet's belief that "the art of losing isn't hard to master". The poem starts off with small losses and continually builds them up as the poem goes on. By supplying the reader with concrete, genuine examples of "lost door keys" and "the hour badly spent", he/she can relate to the poem with some familiarity-people misplace their keys all the time, let alone waste an hour of their day watching television-and understand that losing those things "is no disaster". Bishop's examples are exact and avoid exaggeration in order to relate the true feelings of loss. From "places, and names, and where it was you meant/ to travel", to a more personal loss such as a family heirloom and houses-the poet seeks to expand both the number of losses and the content of those losses to reassure the reader (and quite possibly herself) ...read more.

like disaster"-the poet does a considerable amount of struggling to finish writing this line. The repetition of "like" delays the arrival of the word the poet has been trying to push away this whole time-yet she knows she cannot lie to herself (or the reader) anymore and she must "Write it!" even though it goes against her lesson plan. The poet goes through the act of recognition by writing it down and forces herself to admit it and face the facts. Art's connection to loss is portrayed as one of irony in this piece of writing. An art is an acquired and accomplished skill derived from countless hours of practice and trial and error. Loss is an inevitable aspect of life that can result in disheartening emotions. Bishop successfully combines the two in an ironic playfulness that works in concurrence with extreme seriousness. It seems as though her message tells the reader to practice losing things, because once he/she loses enough things, the biggest most important losses will not be so difficult to overcome, mainly because he/she has practiced and is used to losing things. Bishop's internal conflict is evident through her display of denial throughout the poem. Although she puts in a great deal of effort to disguise her true feelings about the mastery of loss through a number of precise, poetic devices, careful analysis of this poem reveals what she intended to hide. The magnificence in this poem comes from the poet's ability to use a strict, controlled poetic form, like the villanelle, to express such powerfully, uncontrollable emotions through writing. 1 ...read more.