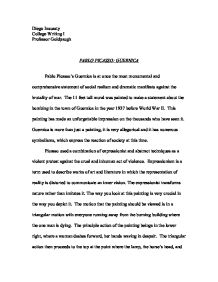 Pablo Picasso's Guernica is at once the most monumental and comprehensive statement of social realism and dramatic manifesto against the brutality of war.

Diego Insuasty College Writing I Professor Goldpaugh PABLO PICASSO: GUERNICA Pablo Picasso's Guernica is at once the most monumental and comprehensive statement of social realism and dramatic manifesto against the brutality of war. The 11 feet tall mural was painted to make a statement about the bombing in the town of Guernica in the year 1937 before World War II. This painting has made an unforgettable impression on the thousands who have seen it. Guernica is more than just a painting, it is very allegorical and it has numerous symbolisms, which express the reaction of society at this time. Picasso used a combination of expressionist and abstract techniques as a violent protest against the cruel and inhuman act of violence. Expressionism is a term used to describe works of art and literature in which the representation of reality is distorted to communicate an inner vision. The expressionist transforms nature rather than imitates it. The way you look at this painting is very crucial in the way you depict it. ...read more.

It has his head turned away from the killing because it humiliates him. This figure is the only one that is standing tall without any harm to him watching over the scene. While the bull is watching over this, the horse howls the anguish of death. The horse represents the people of Guernica, and with the fall of the horse comes the fall of Spain. This painting shows how the mind of Picasso worked and how he was feeling towards what happened. During this time in his life Picasso was very unhappy personally so he wanted to generate his unhappiness in this painting. He did not want to complete the painting and sharpen his message until his emotions had been let out and declared on the painting. He tired to communicate to the viewer the affects of fascism and war and how it affects everyone. By using the horse and the bull, which is a trademark symbol of Spain, he delivered a powerful message against fascism. ...read more.

All of the actually people portrayed in this painting are all the innocent masses of people that were blindly attacked by the bombings and the uncertainty of the government toying with its citizens. The woman crying, holding her dead baby, the man burning in the building and the dismembered body of the soldier represent the mental and physical pain that many endured. The woman holding the lamp is a symbol of hope that Spain will not die and that it shall overcome these tribulations. The expression on her face is one of despair and of awe to what has happened to her town. But she also is the one that represents the many people who want to save Spain. The main theme of the painting is that warfare and the way that politics in some European countries were killing and destroying innocent people and towns. Picasso made this painting in order to get his message across about antifascism and to stop the wars that were happening. This painting of Guernica was placed in a Spanish Pavilion where thousands of people could pass by and not deny what had happened. ...read more.