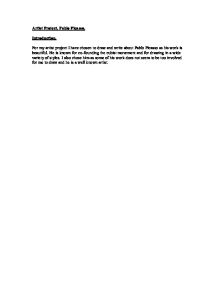 Artist Project. Pablo Picasso. Introduction. For my artist project I have chosen to draw and write about Pablo Picasso as his work is beautiful. He is known for co-founding the cubist movement and for drawing in a wide variety of styles. I also chose him as some of his work does not seem to be too involved for me to draw and he is a well known artist. The Life of Pablo Picasso. Picasso was baptised Pablo Diego Jos� Francisco de Paula Juan Nepomuceno Mar�a de los Remedios Cipriano de la Sant�sima Trinidad Clito, which were the names of his relatives and saints. Added to these were Ruiz and Picasso, for his father and mother, respectively, as per Spanish custom. Born in the city of Malaga in the Andalusian region of Spain, he was the first born of Don Jos� Ruiz y Blasco (1838-1913) ...read more.

They stayed almost four years. On one occasion the father found his son painting over his unfinished sketch of a pigeon. Observing the precision of his son's technique, Ruiz felt that the thirteen-year-old Picasso had surpassed him, and vowed to give up painting. In 1895, Picasso's seven-year old sister, Conchita, died of diptheria - a traumatic event in his life.After her death, the family moved to Barcelona, with Ruiz transferring to its School of Fine Arts. Picasso thrived in the city, regarding it in times of sadness or nostalgia as his true home. Ruiz persuaded the officials at the academy to allow his son to take an entrance exam for the advanced class. This process often took students a month, but Picasso completed it in a week, and the impressed jury admitted Picasso, who was still 13. ...read more.

He named most of his styles of work by different periods of time. Some of the ways he made his work was by pencil, paint and oil pastels. His work was usually of a larger size; however some of his work was smaller. My favourite Picasso pieces. I like this piece as it is simple to draw. . I like this sketch as it is simply drawn using the simplicity of a pencil and shading. I like this image because it is meant to be a camel, but it doesn't look anything like one. I like this picture as it seems to be very simple and easy to draw. Conclusion. From Picasso's work, I have learnt that art does not have to be realistic, nor does it always have to be of a certain caliber. It was difficult to copy some of his work, but most of it was quite easy as he does not draw with great technicality. I have also learnt that art is just how you see the images, not how they're drawn. ...read more.