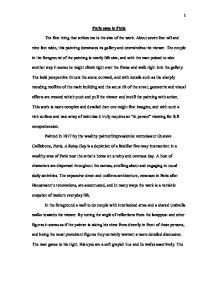 Paris sous la Pluie The first thing that strikes me is the size of the work. About seven feet tall and nine feet wide, this painting dominates its gallery and overwhelms the viewer. The couple in the foreground of the painting is nearly life size, and with the man poised to take another step it seems he might climb right over the frame and walk right into the gallery. The bold perspective thrusts the scene outward, and with details such as the sharply receding roofline of the main building and the acute tilt of the street, geometric and visual effects are created which push and pull the viewer and instill the painting with action. This work is more complex and detailed then one might first imagine, and with such a rich surface and vast array of minutiae it truly requires an "in person" viewing for full comprehension. Painted in 1877 by the wealthy painter/impressionist connoisseur Gustave Caillebotte, Paris, A Rainy Day is a depiction of a familiar five-way intersection in a wealthy area of Paris near the artist's home on a rainy and overcast day. A host of characters are dispersed throughout the canvas, strolling about and engaging in usual daily activities. ...read more.

Even though the picture appears much more finished and Salonesque than most impressionist works, one still feels the transience and modern quality of the work through its style. The water and muck on the street feel nearly tangible. Interesting atmospheric results are achieved through this style of painting. For instance, the wagon wheel has whitish paint covering up its spokes, an indication of the general haziness of that day. Also, in the distance the names of shops are illegible (except for the pharmacy at the base of the previously mentioned building), and the people in the distance turn into tiny blobs of purplish paint. A creamy white is used by Caillebotte throughout the work to highlight figures and objects, a technique which is especially obvious on the repetitive and pervasive umbrellas. The asymmetrical composition should be noted, and on a final visual remark, one should observe that the figures appear to all be separated by roughly the same physical distance. After absorbing the aesthetic aspects of Caillebotte's masterpiece, it is only logical that one should then ask, "Okay, so what does this mean?" Well, the fact that the painting was chosen to represent a rainy day is the first clue given to decipher a 'theme.' ...read more.

by a woman and the man crossing the street looks only at the ground, disqualifying both these men from the title of flaneur. In the expression on their faces it almost seems as if there is some yearning for prior times. Because this painting is a modern cityscape it is ipso facto a painting of modernity (one thinks of Baudelair) and a record of the fashions of 1877. By recording the actual events of his own time, Caillebotte was part of a somewhat radical new type of painting. His figures are shown accurately in contemporary dress, and he has essentially taken a mundane and fleeting moment and captured it eternally on a monumental scale. Celebrating modernity, while simultaneously casting a critical eye, is one of the signature hallmarks of impressionism and inchoate modern art. Paris, A Rainy Day is a complex work of both technical virtuosity and implied thematic elements which synthesize to engross the viewer visually and entice them mentally to think about urban life and feelings of alienation. The painting conflates multiple issues which surround and form the foundation of the art historical study of the Impressionists' Paris, and remains in its grandeur as a historical visual document, a commentary on urban life, and a testament to modernity. 1 ...read more.