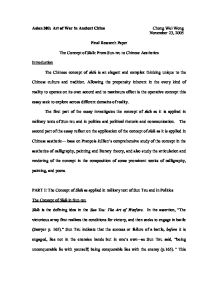 Asian 302: Art of War in Ancient China Chong Wei Wong November 23, 2005 Final Research Paper The Concept of Shih: From Sun-tzu to Chinese Aesthetics Introduction The Chinese concept of shih is an elegant and complex thinking unique to the Chinese culture and tradition. Allowing the propensity inherent in the every kind of reality to operate on its own accord and to maximum effect is the operative concept this essay seek to explore across different domains of reality. The first part of the essay investigates the concept of shih as it is applied in military texts of Sun-tzu and in politics and political rhetoric and communication. The second part of the essay reflect on the application of the concept of shih as it is applied in Chinese aesthetic- base on Fran�ois Jullien's comprehensive study of the concept in the aesthetics of calligraphy, painting and literary theory, and also study the articulation and rendering of the concept in the composition of some prominent works of calligraphy, painting, and poem. PART I: The Concept of Shih as applied in military text of Sun Tzu and in Politics The Concept of Shih in Sun-tzu Shih is the defining idea in the Sun Tzu: The Art of Warfare. In the assertion, "The victorious army first realizes the conditions for victory, and then seeks to engage in battle (Sawyer p. ...read more.