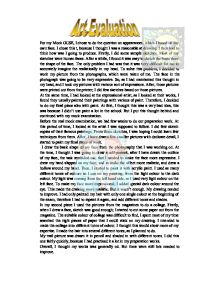 For my Mock GCSE, I chose to do the question on appearances, which I based on my own face. I chose this t, because I thought I was a reasonable at drawing. I then had to think how was I going to produce. Firstly, I did some sample sketches. Most of my sketches were human faces. After a while, I found it was easy to sketch the basic draw the shape of the face. The only problem I had was that it was very difficult for me to accurately imagine the realistically in my head. To solve this problem, I decided to work my picture from the photographs, which were taken of me. ...read more.

Before the real mock examination, we had few weeks to do our preparation work. At this period of time, I looked at the artist I was supposed to follow. I did few sketch copies of their famous paintings. From those sketches, I was hoping I could learn few techniques from them. After, I have drawn few smaller pictures with dedicate detail, I started to paint my final piece of work. I drew the basic shape of my face from the photography that I was working on. At the time, I thought I was going to draw a self-portrait, after I have drawn the outline of my face, the task reminded me, that I needed to make the face more expressive. ...read more.

In my second piece I used the pictures from the magazines to do a collage. Firstly, when I drew a face, sketch was good enough; I started to cut some paper out from the magazine. The suitable colour of collage was difficult to find, I spent most of my time searched the right pieces of paper that I could stick on my drawing. I intended to make the collage into different turns of colour. I thought this would show more of my expertise. I made the hair into several different tones, as I planned to do. My trail picture was drawn it in pencil and shaded in with different tones. I did this one fairly quickly, because I had practised it a lot in my preparation works. Overall, I thought my works was generally ok. But there were still lots needed to improve. ...read more.