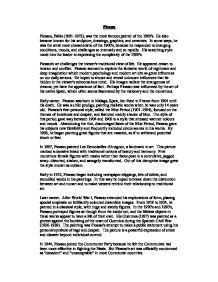 Picasso Picasso, Pablo (1881-1973), was the most famous painter of the 1900's. He also became known for his sculpture, drawings, graphics, and ceramics. In some ways, he was the artist most characteristic of the 1900's, because he responded to changing conditions, moods, and challenges so intensely and so rapidly. His searching style made him the leader in expressing the complexity of the 1900's. Picasso's art challenges the viewer's traditional view of life. He appeared drawn to tension and conflict. Picasso seemed to explore the fantastic world of nightmare and deep imagination which modern psychology and modern art cite as great influences on our daily actions. He hoped to arouse and reveal unknown influences that lie hidden in the viewer's subconscious mind. His images radiate the strangeness of dreams, yet have the appearance of fact. ...read more.

The style of this period gave way between 1904 and 1906 to a style that stressed warmer colours and moods. Abandoning the thin, discouraged faces of the Blue Period, Picasso gave his subjects new flexibility and frequently included circus scenes in his works. By 1906, he began painting great figures that are massive, as if to withstand potential shock or fear. In 1907, Picasso painted Les Demoiselles d'Avignon, a landmark in art. This picture marked a decisive break with traditional notions of beauty and harmony. Five monstrous female figures with masks rather than faces pose in a convulsive, jagged array--distorted, shaken, and savagely transformed. Out of this disruptive image grew the style known as cubism. ...read more.

His Guernica (1937) was painted as a protest against the bombing of the town of Guernica during the Spanish Civil War (1936-1939). The painting was Picasso's attempt to make a public statement using his personal symbols of rage and despair. The picture is a powerful expression of crisis and disaster beyond individual control. In 1944, Picasso joined the Communist Party because he felt the Communists had been more effective in fighting the Nazis. But Picasso's art was officially condemned as "decadent" and "unacceptable" in most Communist countries. After 1945, Picasso's painting, sculpture, and ceramics developed a more relaxed and gentle feeling. He appeared to make peace with the emotions that had tormented him so often in the past. Some critics feel this new Picasso had outlived the best days of his art. Others feel this represented another advance in Picasso's visual and mental adventures in art. ...read more.